I've previously posted about the development of Moiré Maze so here's an overview of how it works as a puzzle.  There are a few clues about its solution but no spoilers. 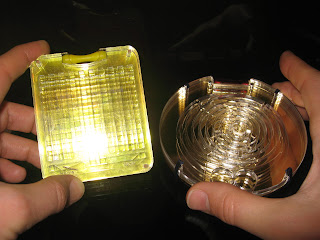 At left is Oskar's Boston Subway puzzle from 2006.  It's a sandwich of acrylic sheets containing laser-cut channels; the bottom layer has 10 parallel channels running north-south and the top layer contains 10 parallel channels running east-west.  It's a criss-cross grid.  There's a layer in between that selectively connects the top and bottom grids at some places, thereby turning it into a puzzling maze.  George Miller constructed the puzzles and put inside a small magnet the user can guide through the maze using a magnetized wand.

It occurred to me to build a similar layered maze using circles instead of straight lines.  Ultimately I developed two layers of concentric ring-shaped channels, one over the other as depicted at left.  The layer at right is sandwiched between the other two layers to selectively allow the user to transfer between the two sets of rings like a maze. 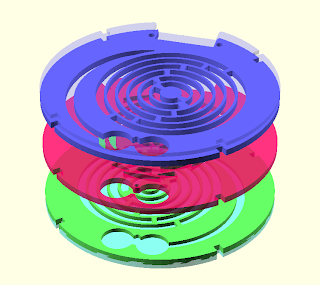 The layers are stacked like this with a mirror on the bottom and a transparent cover on top.  I carefully selected a combination of layer thicknesses and a much thinner magnet to prevent the magnet from becoming turning sideways and becoming wedged between layers, a nuisance Boston Subway sometimes exhibited. 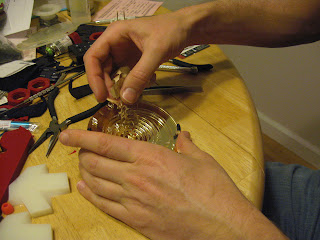 Laser cut acrylic comes with a protective film over the surface.  To avoid getting dust and fingerprints on the layers inside the puzzle, I only removed the protective film after each layer had been assembled into the puzzle. 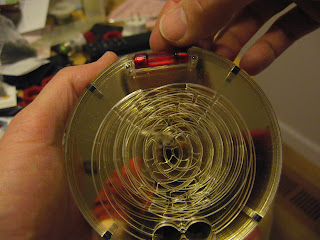 But there's more to this puzzle than a mere shape variation on Boston Subway--it introduces a visual subterfuge that misdirects the user away from the solution.  The critical secret is plainly visible, even in the photo, but it's tough for a viewer to choose to see it once their mind has resolved the image.  Some testers couldn't even force themselves to see it when the solution was shown to them. 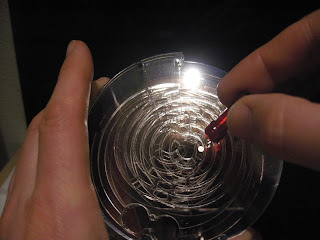 In Boston Subway it was sometimes difficult to locate the little silvery magnet because it reflected the same colors as the neutral mirror and irridescent sheets.  I chose to use a bronze-colored mirror with Moiré Maze to enhance the contrast, so the silver magnet is easier to distinguish against the bronze-tinted background. 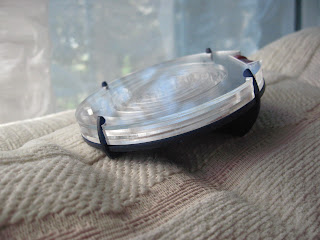 As a final touch I gave Moiré Maze a built-in stand that secures the layers and holds the puzzle at a convenient slope for playing.  Initially I'd planned to make the stand with laser-cut acrylic like the rest of the puzzle, but after some experimentation I substituted dark-blue pieces 3D-printed from my SD300 because the PVC material is so resilient that it can squeeze the acrylic sheets tightly together.  If I had made those piece of acrylic, then the stand's outer pieces would be strained in tension and would thus be vulnerable to breakage--acrylic tends to fracture under stress.
Posted by Scott Elliott at 12:18 PM