My Its' Nuts toy went on sale at Grand Illusions last month.  Their initial inventory quickly sold out after it appeared in their monthly newsletter, so I made another batch on the SD300 to enable them to restock.

Grand Illusions is a web store packed with all sorts of deceptive novelties, plus an online toy museum and gallery. 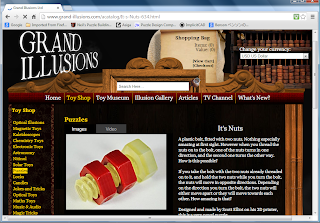 Here's a video about Its' Nuts featuring Tim Rowett, an extraordinary toy collector who had purchased a copy of the toy directly from me last year at the International Puzzle Party 32 in Washington, DC.


Puzzle designer Evgeniy Grigoriev created his own version, which he titled the Incredible Screw.  Grigoriev is famous for his twisty-cube puzzles, and twice set the record for building the World's Smallest Rubik's Cube.  On his version, notice how the nuts move at different rates when he turns the bolt!

Matt Ruggles independently designed his own version, which can be downloaded from Thingiverse for anyone who wants to build it.  Here's a picture comparing my original model (left) with his design (right). Posted by Scott Elliott at 8:32 PM No comments: