What should I name this puzzle?

It pays to share with non-puzzlers.  This puzzle was inspired by a non-puzzler's comments on a study model, and it reached completion in just a few days.  And it's remarkably ideal for building on my SD300 because it can mass-produce them quickly, easily, and economically. 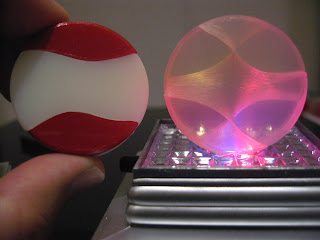 It began when I shared this geometric model with my coworkers--several people enjoyed playing with it.  It's not really a puzzle, but when they took it apart they had trouble putting it back together.  One coworker attributed it to the circular shape, the most distinguishable feature when the pieces are apart, because it encourages the user to instinctively follow the wrong contours. 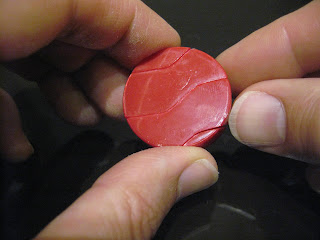 His comments let me to design this puzzle with two congruent pieces, whose circular shape and curved surfaces are intended to mislead the user.  This is a breakthrough puzzle for me because it's my first that uses congruent pieces that exhibit symmetry relative to each other, yet it has only one unique solution out of the four permutations in which the pieces could be oriented. 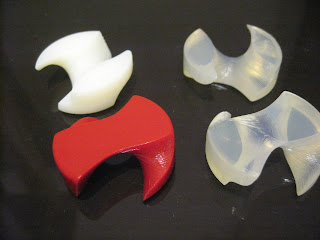 The side walls give a small hint at how it works.  Not much, though. 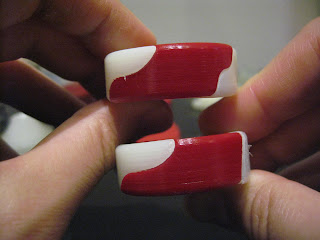 I'd originally planned it as a colorful opaque puzzle, with an appearance like a bonbon.  But it looks stunning in the SD300's transparent material, which shows off the delicate internal contours when the puzzle is assembled. 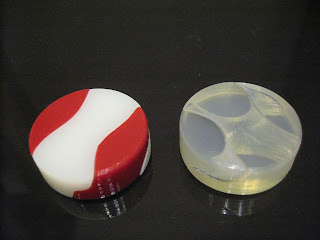 I'm also experimenting with other applications of these principles.  This trillion-shaped puzzle has contours that imply 3 axes of rotation, running through each of the 3 corners.  Naturally that's not really possible, but the illusion is sufficiently distracting that my testers had a really hard time with it. 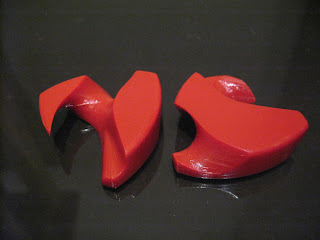