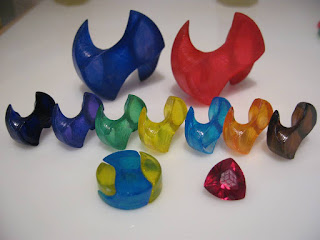 Material for the SD300 is offered in a very limited selection of colors, so naturally I was intrigued by Sean Michael Ragan's blog post Stain PVC Pipe Any Color You Like.  So I bought an assortment of Sculpt Nouveau solvent dyes and tested them on 3D printed vinyl parts from the SD300.  They emerged brightly tinted in candy-like colors! 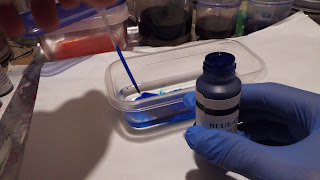 Solvent dyes are very highly concentrated, but they're formulated to be diluted with solvents--like the name implies!  I tested a variety of PVC solvents, using disposable pipettes to measure similar volumes of dye.  Not surprisingly, I got the best results from the most powerful solvent, SCIGRIP 2007.

The solvents I tested, starting with the most satisfactory: 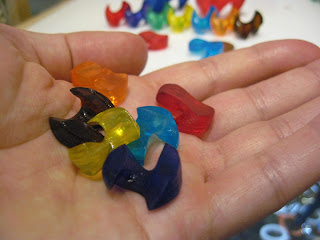 After testing such a wide assortment of solvents, dyes, and tints, I made dozens of these little test puzzles so I handed them out at this year's International Puzzle Party in Ottawa. 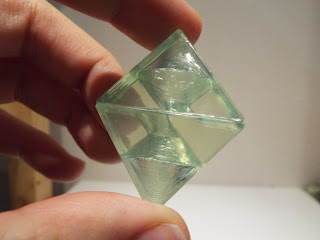 I've also been experimenting with a subtle green tint, trying to imitate the appearance of real glass.
Posted by Scott Elliott at 7:44 PM 3 comments: