Success 3 - Guile in the Box

Partial-spoiler warning: This blogpost does not disclose the solution, but for the sake of discussion it discloses history and design details that could spoil some of the surprises, especially for avid puzzlers. 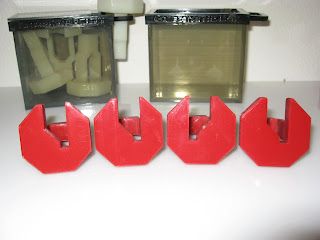 Guile in the Box was my first-ever entry in the Nob Yoshigihara Puzzle Design competition, another personal landmark.  The challenge is to fit the four pieces into the box and shut the lid.  The four pieces are almost identical--each has an off-center notch, but one piece is a mirror image of the other three.  The box at rear left shows how three pieces (white) nearly fill the box, so the fourth piece is attached to a storage hook on the outside of the box. 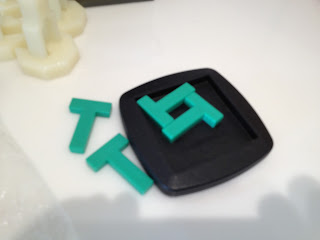 Inspiration came from the 4-T Puzzle, an elegant challenge to fit four T-shaped pieces into square openings of two different sizes.  It's trivial to fit the pieces into the larger square, but the smaller one requires an "Aha!" insight.  The 4-T Puzzle is currently sold by ThinkFun. 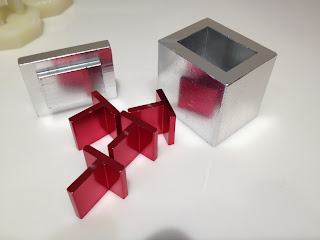 Bits & Pieces sold a derivative called T Party, which extended 4-T Puzzle into a 3-dimensional puzzle by transforming the tray into a box with a lid, and by replacing the four T-shaped pieces with extruded aluminum segments.  The red pieces are cut from aluminum T angles.  Unfortunately the stock-sized aluminum didn't have the right proportions for this puzzle, so T Party has a number of unintended solutions other than the elegant one the designer intended.

Over time I grew dissatisfied with T Party because so many people who attempted it found inelegant solutions: arrangements that fit entirely inside the box, but didn't resemble the intended solution.  And it didn't exploit its three-dimensional design to accomplish anything new. 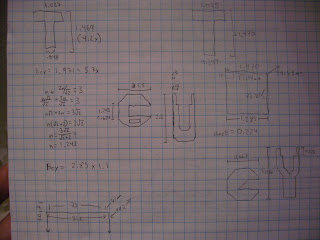 So I devised another three-dimensional adaptation with careful attention to all the specific ratios of height, width, and wall-thickness that would be required to replicate the behavior of the T-pieces in a square box. 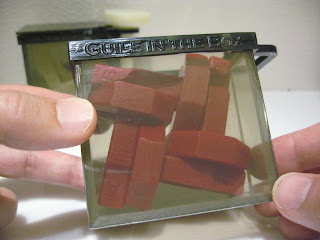 I wanted the pieces to fit inside the box like they had in 4-T Puzzle, but I wanted there to be an added twist: that shouldn't be the solution to the puzzle!  But how to accomplish that? 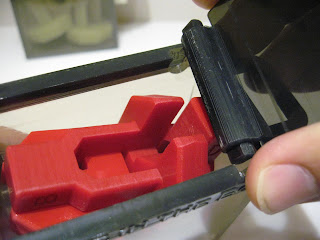 Gotcha!  It's impossible to put the removable lid on when the pieces are arranged in the 4-T configuration because the pieces block access to the corner where the lid attaches to the box.  Users briefly think they've found the solution, but they can't close the lid--which unambiguously tells them they need to try something else! 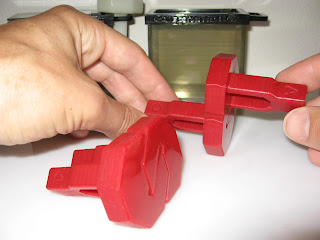 To keep things interesting the asymmetrical pieces can fit together in various neat ways, but they can't all fit together the same way because one piece is a mirror image of the others.  I took advantage of a lot of testers' feedback while developing the puzzle, and tuned the pieces so they can fit and interlock in all sorts of fascinatingly distracting configurations. 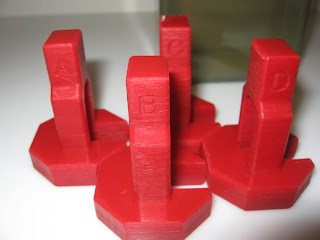 The strange combination of pieces (3 left-handed and 1 right-handed) led many testers to think they'd gotten a mismatched set.  I embossed letters A, B, C, and D onto the four pieces to provide a visual confirmation they were correctly matched. 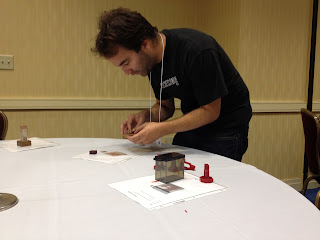 At the design competition Guile in the Box was exhibited adjacent to Tom Jolly's Little Window, another 4-piece packing puzzle handsomely crafted from manzanita and zebrawood.  Above, puzzle enthusiast Bram Cohen is trying to fit together Little Window after he'd already finished Guile in the Box.

[EDIT] As the founder of Bittorent Corporation, Bram Cohen got a bit of nice press today here.  It's so nice how well-connected everything is in the puzzle domain!

Posted by Scott Elliott at 1:56 PM