I took another stab at the Peppermint Candy puzzle which had been vulnerable to coming apart in unintended ways.  I carefully refined the curves so each piece would 'reach around' to brace itself against the back side of the puzzle and made the walls thicker so it would be more rigid.

Honestly, I wasn't sure it would suffice.  But it worked!

Here's the side with the ball sticking out.  The cut in the ball is lined up with the cuts in the shell but it won't open in this position. 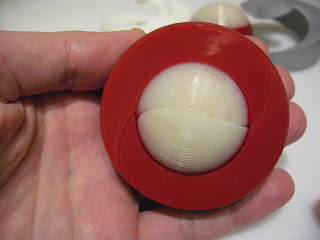 The other side of the puzzle looks about the same, but it has a white dome instead of an opening so the ball can't be seen from this side.  The parting line forms an S-shape where it passes through the domed part. 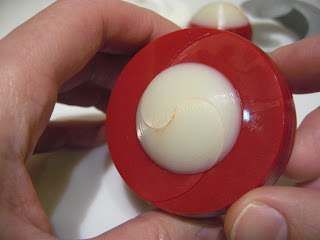 Here's a video explanation of the puzzle in detail.


For comparison I ordered a test part built in SLS nylon.  It's stiffer than the part built on the SD300, a good thing, but it lacks the contrasting colors.  But the colors aren't just cosmetic; my testers thought the colors contributed to the challenge of solving the puzzle. 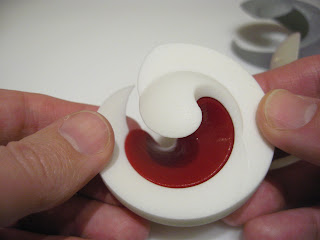 I built the ball pieces in a very specific orientation in order to put the colors exactly where I wanted them.  Here's how the ball looks outside the puzzle shell. 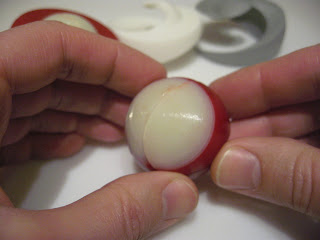 Since the part required a specific build orientation I couldn't really position it for optimal post-processing.  Each piece had a thin edge that would have been particularly vulnerable to chipping during cleaning, so I isolated that area in a little 'box' of peeling cuts. 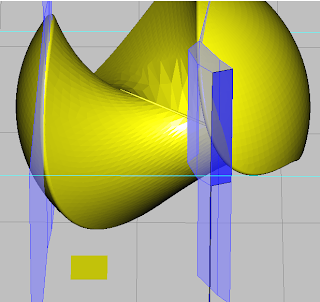 Most of the layers in the isolated box fell away when the surrounding areas were cleaned, so it didn't make the cleaning work any slower.  Except when I got to the thinnest part, the isolated box allowed me to gently peel away the last bits of material...leaving the thin edge smooth and intact.  As usual, I solvent-dipped the parts to give them greater strength and a slick finish! 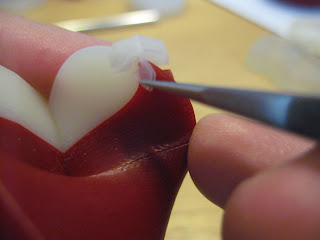