I ran a build overnight, but it didn't finish. The software had estimated there was sufficient media, but this morning the display cryptically said "Unfeed error." That's a new one. 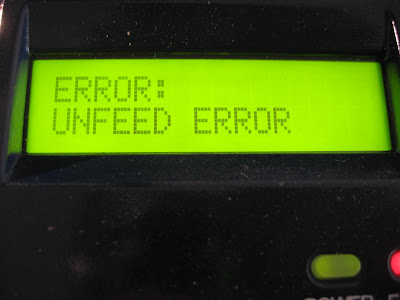 Curious, I tried to open the media door but something was blocking it. I raised the top cover and looked into the media area and saw something I hadn't seen before: an empty PVC roll lying crookedly in the door hinge. In itself, that would be easy to fix. 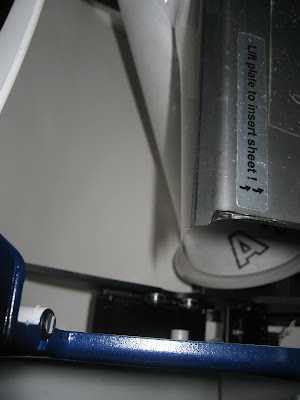 I removed the obstruction and the door opened normally, revealing yet another unusual sight. The machine had reached the end of the roll and had apparently pulled a folded-and-creased piece of PVC into the feeder, which was now jammed internally. The feeder had lifted the empty cardboard roll entirely off the rollers and it had fallen into the door hinge.

I cut away the sheet and inspected the roll. It was folded but the crease didn't run all the way to the end of the sheet, which meant it must have been folded after it had unrolled. (The entire fold would have been solidly creased if it had been folded when the roll was manufactured.) No doubt the SD300 didn't recognize the end-of-roll condition, and it got twisted when the roll fell. 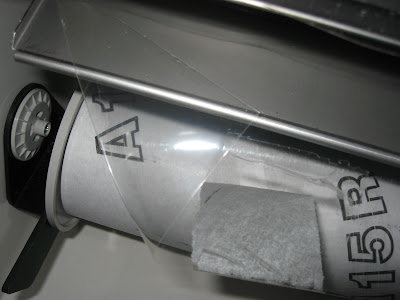 There was still PVC jammed in the media feeder, so I selected "un-feed media" from the front panel. It still couldn't eject the sheet, so I carefully tugged to overcome the resistance while permitting the machine to feed the sheet at its own speed. It was easy to see why it was so hard to eject the sheet: it had been folded over so tightly that the thermoplastic PVC had fused into a thick bead on one edge. 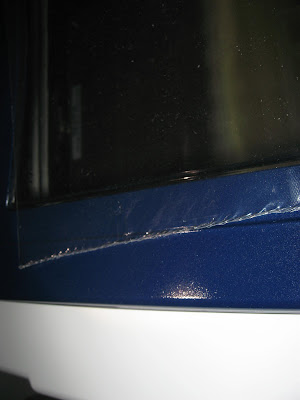 The log seemed to explain everything. The SD300 hadn't recognized the low-media condition and thought the roll had several meters of material still remaining. But it recognized the feeder had pulled in the wrong amount of PVC, so it ejected it and attempted to feed it again. That would probably explain how the roll got lifted and dropped again.

Despite the error, the machine prevented damage to the model. It continued happily after I cleared the feeder and refilled the materials. The finished parts were perfect. 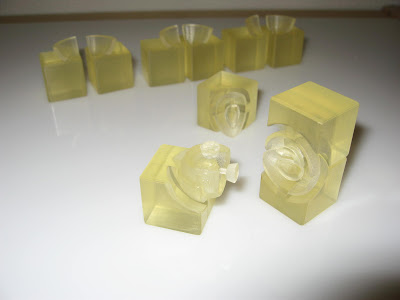