I left the SD300 running a build overnight, but this morning I found it had run out of material when it had just 5 layers left to build. I decided to change just the PVC roll and let it finish the build while I took a shower...and I intended to replace the rest of the material kit later (glue, AG cartridge, pens). The build completed okay, but later I started building another model without remembering to replace the rest of the consumables. 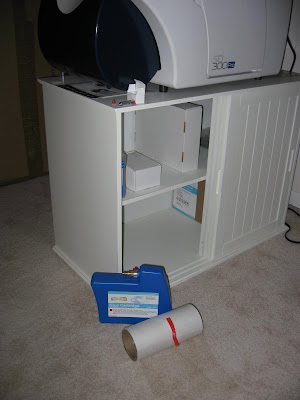 I left the machine running the second build while I went about my daily errands. While I was shopping I suddenly remembered that I hadn't replaced all the consumables, so I drove home hoping I could stop it before it ran out of glue or masking fluid.

Too late, I found the machine had stopped after building 137 of the model's 200 layers. The last few layers were barely bonded with inconsistent splotches of glue, and the last layer had simply come apart during cutting and masking. The machine was unhurt, but the model was ruined. (Everything worked fine after cleaning, replacing consumables, and purging the system.) 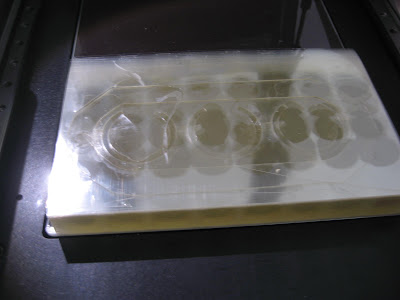 The SD300's log suggests it was able to cope with the diminishing supplies until it reached layer 137, at which point the machine began detecting problems. Typical layers are about ~167 microns thick, but layer 137 measured only 104 microns because the last sheet had come loose. Recognizing an aberration, the machine spent half a minute re-measuring the layer again and again, eventually logging (in colloqual English) "Checked delta is 103micron, not good."

The machine tried to compensate and finish the model anyway, increasing the number of layers to compensate for the abnormally-thin material. But the layer began to come apart during cutting, and an AntiGlue pen snagged on a loose shard during masking. The machine paused itself and reported an error, awaiting an operator to decide whether the model could be salvaged. 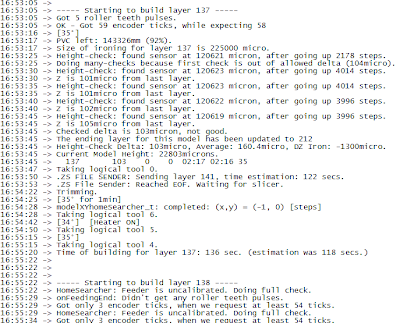 I plan to assiduously avoid repeating this mistake in the future. Aside from ruining the model, running out of glue probably poses other risks because the model could disintegrate and drop debris into the machinery.

Luckily the machine had stopped promptly when this model came apart. Cleaning up was made considerably easier by Solido's SDView utility, which gives the operator direct control for maintenance. After this incident I needed to lower the build table to clean away loose bits of plastic, purge the glue system, and clean the glue trap. 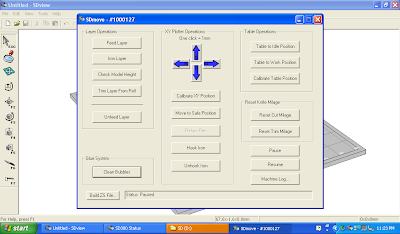