I was surprised to discover Shapeways put my Minimis 2x2x1 puzzle model in the Featured Models section on their homepage where anyone might stumble onto it and purchase it. I sure hope I uploaded the right version of the file! 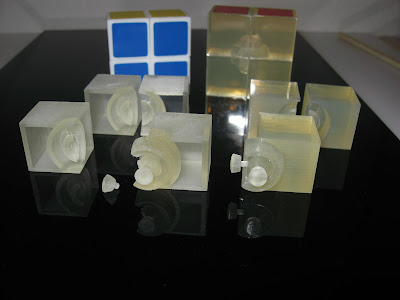 The 2x2x1 concept is so simple that plenty of designers build it as a starter-puzzle; indeed there are five other variants on Shapeways besides mine. But apparently mine is unique in using only four pieces without screws, pins, or other parts.

Remarkably, two other designers have already asked permission to adapt the mechanism (including one designer whose 2x2x1 model has been listed for many months at Shapeways). This was a learning exercise and I always intended to share it with the puzzle community, so this was very satisfying.
Posted by Scott Elliott at 9:29 PM