Here's a part that includes an edge that tapers down to 0.10mm in thickness, far thinner than most 3D fabrication processes are rated for. I had copies built by Invision HR, SLS, and my SD 300 and compared how they handled the thin taper.

At left, the blue part was built by an Invision HR. It truncated the taper before the end, and the portion it built was brittle so the leftmost taper broke off. But this isn't a fair comparison because the part was built in a vertical orientation, so the build didn't take advantage of the Invision HR's excellent Z-axis resolution. 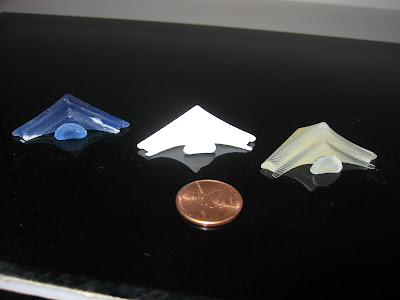 The SLS part was built in bright white polyamide. It was difficult to get a picture of it, but you can see the thin tapers were built to their full length. My caliper measures the thickness as 0.19~0.23 mm, about twice the thickness specified in the STL file, but the tapers are sufficiently tough that they can survive handling. But the nylon exhibits signs of fatigue after flexing, suggesting it would eventually break.

At right, the SD300 built the thinnest part of the taper to full length with a measured thickness of 0.16~0.17 mm. The taper is thinner and more-flexible than the SLS part, but it's tougher too. It showed no fatigue after flexing, which isn't a surprise: it's basically just a single thickness of PVC sheet. But elsewhere, on the top of the curved 'foot', the top sheet of PVC would probably peel off if it was exposed to much use. 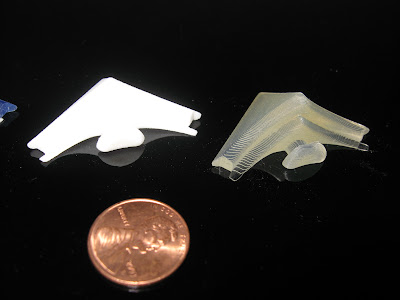 That weak spot presented a good opportunity to test the effectiveness of solvent-finishing, which I discussed in my last post. I dipped the part in Weld-On 2007 and tested it against an untreated part. I put both parts into the cavity for which they'd been designed to fit and put them through mechanical tests. Afterward the untreated part showed some wear, at left in the picture below. The weak layer is still attached, but it's peeling. The solvent-dipped part at right is in good condition, exhibiting no signs of wear or damage. 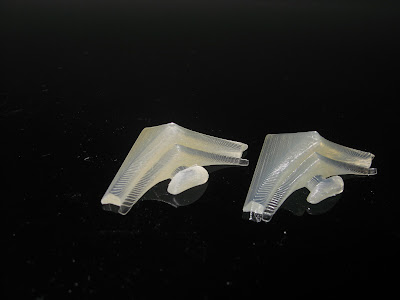