I continued to refine the 2x2x1 puzzle, thanks to the SD300's ability to churn out a working model in under 4 hours. For my third revision I added two posts to the globe in the middle.

Due to a goof I built the posts only 1.7mm thick instead of an intended 3.4mm, but this turned out to be a happy accident as they're quite strong after solvent treatment. (Radius, diameter, whatever...!) They were built parallel to the build plane for maximum strength. 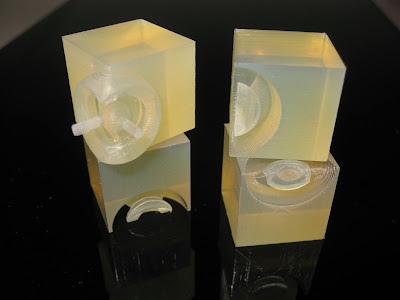 The posts both stabilize the moving pieces and restrict them to moving around the center axis. This third model worked better than its predecessors, but it was still fairly easy to pop the puzzle apart when the parts were slightly turned off-axis. 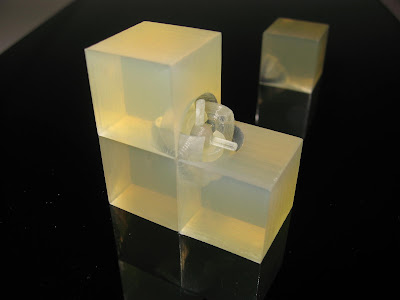 So my fourth revision adds caps to the posts, in a shape that locks into the spherical cavities in the moving parts. That way the post should restrict the parts to axial movements and the cap should hold the puzzle together. 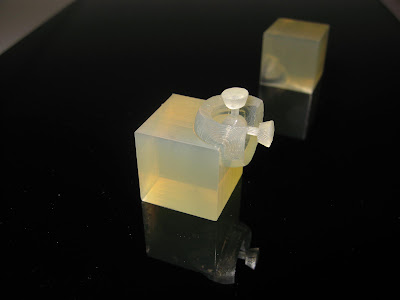 Here's a side-by-side comparison of the third and fourth models partly assembled. 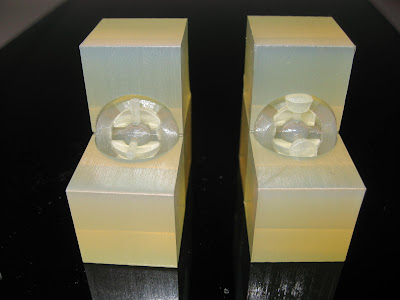 The fourth-revision puzzle functioned perfectly after assembly. The PVC has just enough flex that I had no trouble gently pushing the parts together, but the new caps are secure enough that the puzzle doesn't readily come apart...even with effort!


Here's a picture after adding colored stickers to identify the sides. Just for novelty, I left the top & bottom uncovered to expose the mechanism through the transparent surfaces. 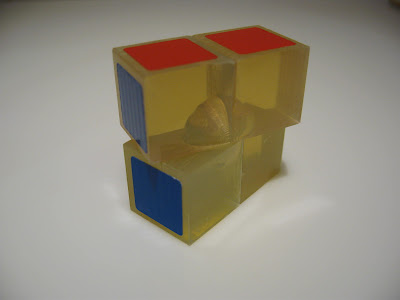