A Week of Successful Failures 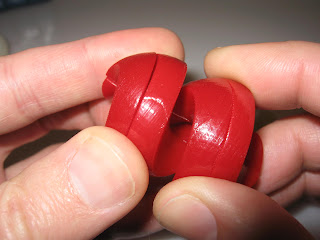 This week I experimented with a new 'Marble' puzzle, using direct-modeling CAD programs CoCreate and ViaCAD to create the helical geometry.  Previously I'd built these puzzles using Alibre, but it had continually exhibited problems with the helical geometry near the origin.  That should be no surprise, I guess, because Alibre's method of defining geometry would yield undefined results for structures that intersect the axis of a helix.  Direct-modeling CAD probably won't have that problem because I can define the basic geometry first and then apply a coherent twist as a second operation. 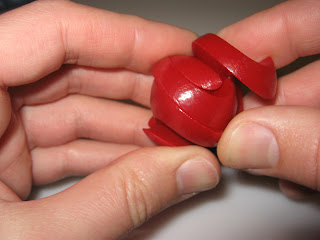 But my first attempt didn't work quite right.  Although the STL mesh was superior quality to the ones Alibre had generated, the ends of the helix had a slightly different pitch than the middle.  The pieces would fit together, but it require excessive force to get past the section where the pitches were mismatched.  I'd just applied the "twist" transformation incorrectly. 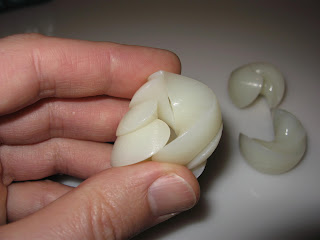 I modeled the puzzle again, taking care to allow sufficient gaps between pieces and applying a consistent twist to the whole puzzle.  Now the curves were accurate so the pieces fit together smoothly, but the gaps were too large so the pieces wouldn't hold together snugly. 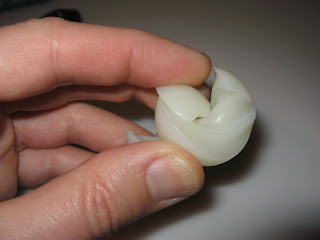 This was an experiment with two new CAD programs, so I decided to build a simpler two-piece dissection as a learning exercise.  I tried to compensate for the problems I'd encountered in the two previous samples.  This puzzle emerged with an inconsistent twist, just like the red one, so the curves didn't quite match.  Evidently I'd compensated in the wrong way. 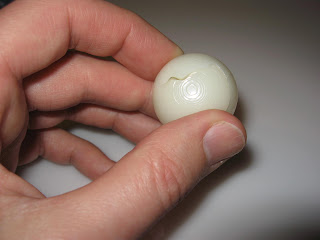 Like the red one, the puzzle had to be forced past the mismatched curves.  But then the pieces were unpleasantly loose because the gaps were too large.  Again I had compensated incorrectly, so instead of avoiding the faults of the previous two samples this puzzle exhibited all the faults of both.  Even so, that's a good sign because it confirms that these issues can be properly managed...I just got careless somewhere. 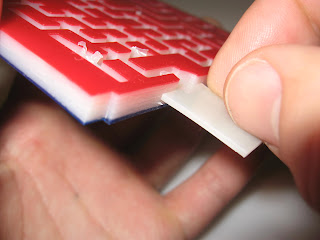 In the meantime I had tried to build a new revision of my flat maze puzzle, but I ran into trouble while cleaning the model.  The outer layers had cleaned up nicely, just like the last two test models, but I was completely unable to clean the leftover material out of the middle layers.  It clung stubbornly in the grooves. 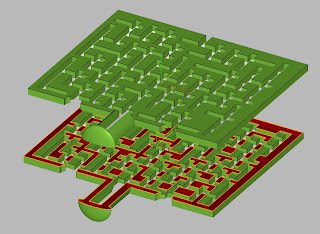 In my last revision of this model I'd brought the two surfaces closer together so their respective grooves overlapped.  That created continuous loops and circuits in the middle of the model, but these middle paths weren't completely accessible from either side...so the material couldn't be pulled out from either side. 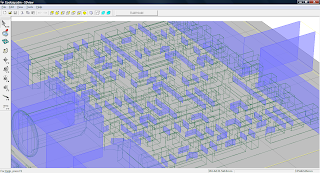 In SDView I added an elaborate web of small peeling cuts inside the middle layers of the maze to isolate the material into pieces that could be pulled out from one side or the other. 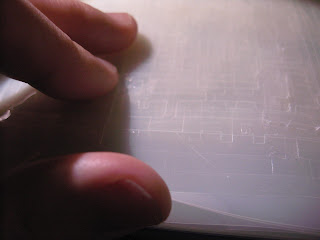 But the layers didn't laminate together properly when I tried to build the model, so I canceled it halfway through because the plastic was starting to come apart.  The last three versions of this model had built okay (other than entrapped material in the last) so I'm not sure whether this was just bad luck or an indication of some other fault.  Maybe there are just too many cuts in the model, or maybe the cutting knife needs to be replaced.

Despite all these experimental failures, I think it was a very productive week!
Posted by Scott Elliott at 1:41 PM