Years ago I tried to devise a two-sided puzzle where the pieces would somehow interact between two mazes embossed on top-and-bottom surfaces, but I couldn't devise a suitable way to make the pieces interact.  This sketch sat untouched on my whiteboard for almost a decade. 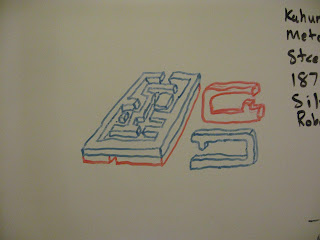 A helpful inspiration came from Oskar's adaptation of Richard Cooksey's cylindrical maze puzzle.  Rather than trying to navigate mazes on both surfaces at the same time, I tried to design a puzzle that allowed the user to navigate one maze on one surface at a time, but switch between the two mazes strategically. 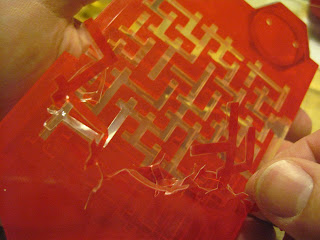 I built the first model in transparent material with a layer of red on one side to help visualize the maze.  A major mistake was immediately obvious: the horizontal and vertical components of the maze were inadvertently embossed on the wrong surfaces.  It might be possible to trace the maze with a pointer, but it couldn't be navigated with second part I'd envisioned for it. 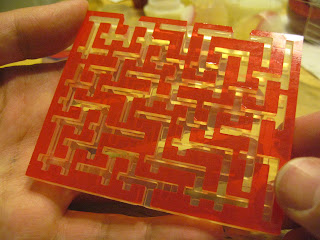 So I revised the data and built another test model.  Since I'd recently obtained blue material, I incorporated a layer of blue on one side and red on the other.  The maze was correctly laid out this time: it didn't look right visually, but that's the point.  Now I needed the special accessory for navigating the two surfaces. 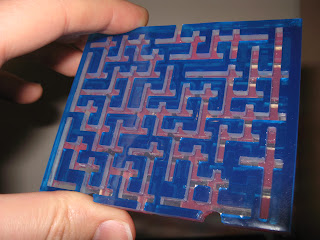 I needed a second piece with posts that navigated the two mazes, but with sufficient side clearances to allow those posts to travel the entire width of the maze.  That called for an extremely wide piece. 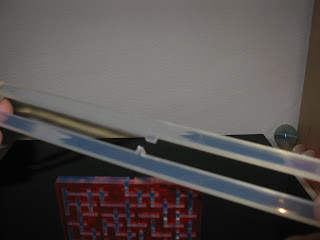 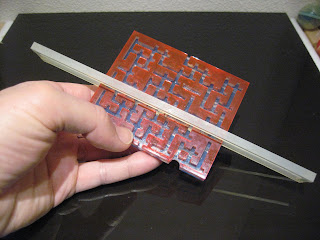