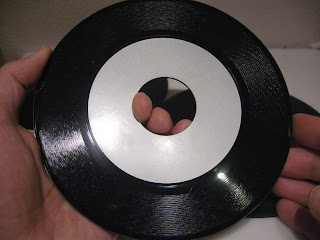 I 3D printed this imitation of a 45-RPM pop single by designing a simple disc with a long spiral groove.  When a model's geometry has small channels, narrower than 1mm, the SD300 cuts the outlines but doesn't apply Anti-Glue so the plastic stays in one piece unless the user forcibly tears it away.  That makes it possible to scribe cosmetic markings like a record groove or the text on my Cuburr puzzle. The last time I tried to build this 45-RPM record model with ordinary black material, the resulting disc was too transparent.  The grooves were pretty, but the transparency ruined the effect.  To make the disc appear dark and opaque this time I sandwiched a layer of red material and a layer of blue material between the layers of black material.

The grooves look realistic enough to the eye, but they're too narrow to play back on an ordinary turntable.  I tried it, but the needle just skates across the surface.  So this 3D printed record is nothing more than a visual novelty.  The files can be downloaded from Thingiverse. 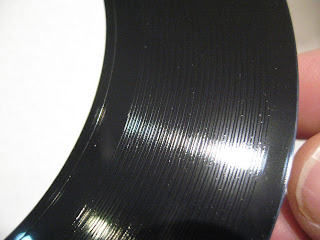 Posted by Scott Elliott at 3:46 PM