While the SD300 was building a model on Tuesday night it made a distinctive 'click' noise, just once while it was using the Anti-Glue pens.  It didn't sound bad, but it was an unfamiliar sound I'd never heard before.

It never made the click noise again, but a few minutes later it began exhibiting problems putting the Anti-Glue pens away.  Eventually the machine stopped with a "Return Tool Error" message.  In SD300 lingo the Anti-Glue pens are named Tool #4, Tool #5, and Tool #6 so this message means it was unable to return a pen to its holder. 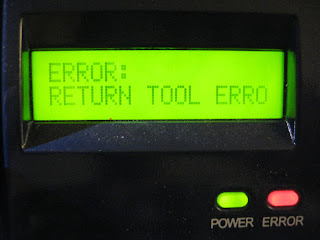 That wasn't too alarming.  Maybe that click noise had been a pen or holder had been knocked loose.  I removed the pen from the plotter and carefully returned it by hand.  The machine resumed building for one more layer but the error happened again as soon as it tried to use the Anti-Glue pens.  I installed a brand new set of Anti-Glue pens, but the error kept coming back.

When the machine had logged 24 consecutive errors I decided to give up.  It was late, so I dashed off an email and went to bed.  By Wednesday morning I already received two helpful replies from the folks at SolidVision, which recently merged with FISHER/UNITECH.  I appreciated the very prompt response but I had to go to work because I only do 3D printing as a hobby, so I didn't have an opportunity to do any troubleshooting until the following evening.

Jason Harris offered me several options, but he suggested the solution might be as simple as squeezing the spring on the affected pen holder.  The pens holders are spring-loaded clips, likely the same ones used in Roland DXY-series pen plotters.  A spring is supposed to ensure an empty pen-holder is narrower than an occupied one.  Could it really be this simple? 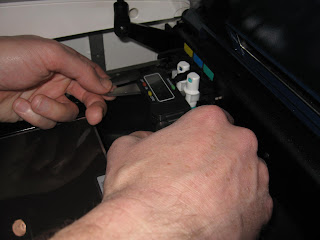 Curious, I brought out the calipers and measured the pen holders both with and without pens in them.  The openings on the working pen holders were all about 7.9mm wide, but the malfunctioning pen holder was open about 8.4mm.  That didn't seem like much difference, but I carefully applied pressure to the spring until the bad pen holder measured less than 8mm, then I restarted the machine.

It worked!  Then it worked again!  Just to be sure I repeatedly pressed Pause/Resume to make the machine take and return the pen a dozen times, and the pens returned to the holders every time. 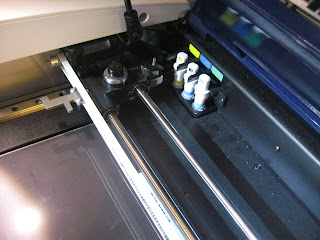 This week my SD300 has logged over a thousand build jobs.  I've occasionally had issues that resulted in canceling a job or damaging a model, but this is the first time the machine itself had exhibited a fault.  In hindsight I consider that a very good record, especially considering how easily the fault was resolved.  Admittedly there are challenges cleaning the support material from some models, but the machine itself has never demanded anything more than clearing a jam or replacing spent consumables.
Posted by Scott Elliott at 10:41 PM