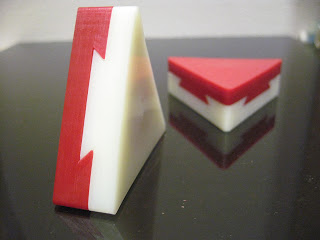 As before, I aimed to keep overhangs within the buildable range of Makerbots and other hobby printers.  That imposed some interesting design constraints, which forced me to distribute features of the locking mechanism between the base and lid.  But I filleted the internal corners to 0.5mm purely for my own convenience: it's a bit easier to peel unused material out of SD300 models if there aren't sharp internal corners. 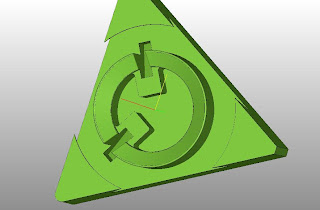 At first I built a transparent model and tested it with two black triangular pieces so I could look inside to see how well it was working.  It's hard to see, but the picture below shows how the black triangles slide toward the outside of the puzzle when it's lying flat and thus lock the joint.

When it's flipped upside down, the contours in the lid cause the black triangles to slide toward the outside edges, locking the joint like the previous picture.
It worked, but those triangular pieces just didn't slide very well.  So I tried using round discs instead.  That worked much better because the discs easily rolled around when the puzzle was tipped. Here's a video showing how the parts work and how the puzzle opens.

I designed the mechanism so it would only unlock when one particular corner of the triangle was pointed downward, because I thought that would be the least intuitive way to hold the puzzle.  As it turns out I'd guessed wrongly about that: testers instinctively hold the puzzle with one of the dovetails facing up (to look at the joint, I guess) and hence they naturally hold it with a corner pointing downward.  So it isn't especially challenging, but it definitely works! 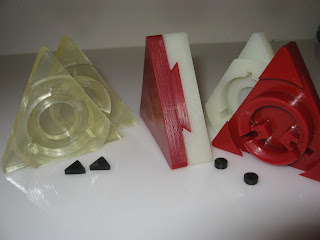