A Peek into Peeling Cuts

I've received several questions about peeling cuts and removal of the extra material, so here's a brief peek at peeling cuts with my recent screw & nut projects.

The SD300 builds by ironing layers of PVC film on top of the build platform one-at-a-time, and selectively bonding and cutting each layer of PVC film. Regions that belong to the model are bonded to the layers above and below, and unused material is left in-place (as to act as support material) until the build is finished.

Before building these four bolt models (yellow) I added one long peeling cut (blue) to divide the unused material into two halves. The layers of PVC will be stacked parallel to the table, so the peeling cut is perpendicular to the actual layers of the model. 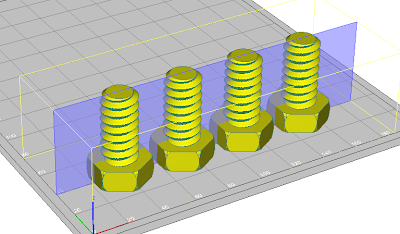 There's no single "right" way to arrange peeling cuts. You could add as many peeling cuts as you want so long as there are enough cuts to free the model from the surrounding material. Here I arbitrarily added an extra peeling cut to isolate some of the support material into two sub-regions. 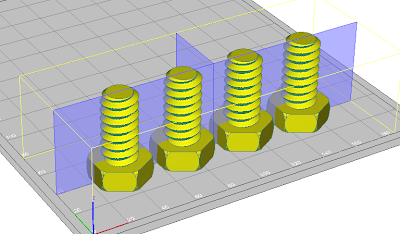 Thanks to the extra cut, the material peeled away from two of the screws at a time instead of all four. It took longer than it might have, but there's no harm in making extra peeling cuts. Peeling cuts only affect the unused material, they don't cut into the model itself. 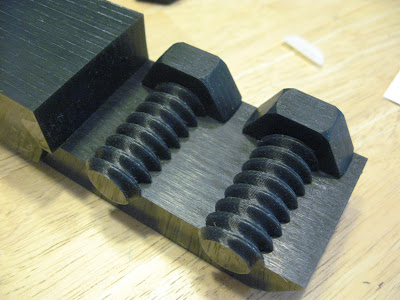 The nuts were a little more complicated. I don't put small cuts inside hollow models like I used to because I've learned a better way to remove the material inside holes. (I'll explain that below.) I added peeling cuts between adjacent nuts, but not inside. 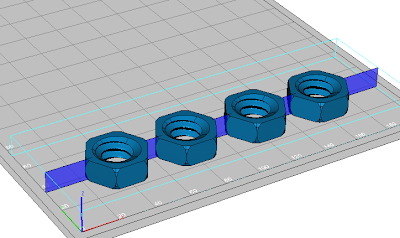 Solido provided strong forceps to help peel away material. Those forceps are great for most models, but they're awkward for cleaning material from holes like these so I bought a set of hobby probes. 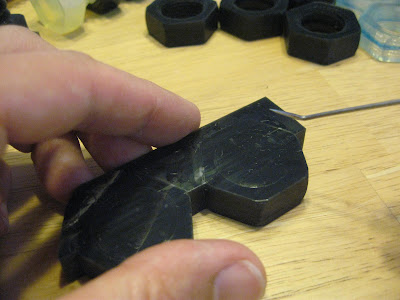 The probe's sharp point stabs neatly through several layers of unused material in the hole. Tipping the probe lifts the material so it can be pulled away. 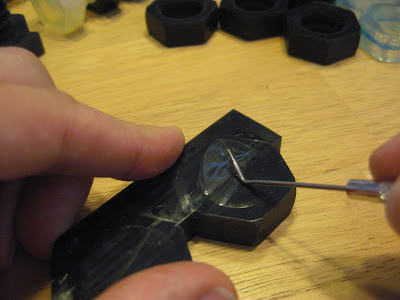 Once the ends are free, the material can be pried out by hand. 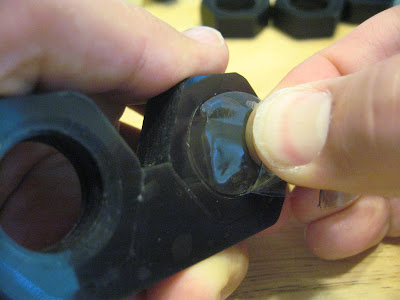 The layers of extra material have been glued together in a chain. But these layers didn't just pull out freely; I carefully tugged at the edge of each sheet to tear out the next one, one-at-a-time. 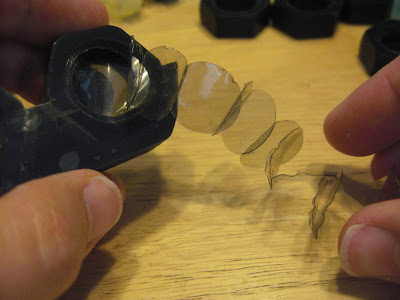 Sometimes one layer of support material tears free of the next, so it's necessary to insert the probe and pry the next layer loose before continuing the chain. 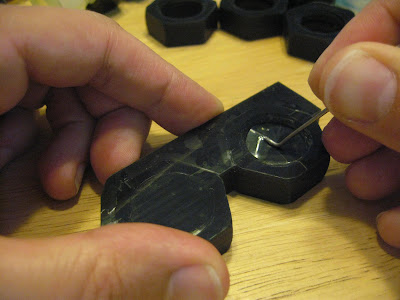 After clearing the holes, I removed the rest of the support material from the outside. 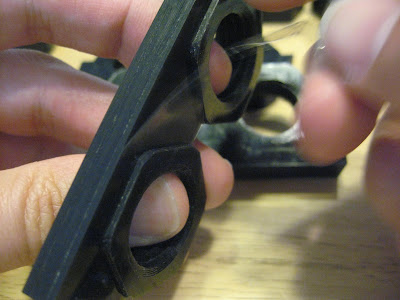 Most observers notice there's a high proportion of unused material in each build, which is true. It's roughly like a CNC mill that custom-builds a block for each model, building up the layers additively and then peeling them away material afterward. But it's generally economical because the process is energy-efficient and uses raw material that costs 10 to 15 times less per unit-volume than other 3D printers in its price class. Nevertheless, the cost per model can vary widely from one sample to the next depending on how efficiently the material is utilized. 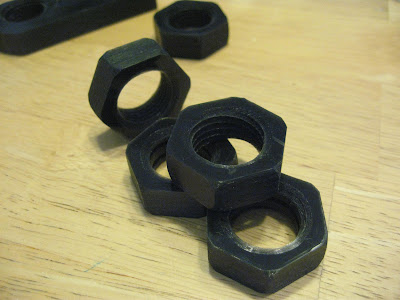 The SD300 can't directly re-use the leftover material, but it's recyclable as PVC scrap (recycle code 4) by bagging and tagging it and delivering it to a commercial recycler. It can't go with household recycling, so I collect the SD300's scraps in a separate bin. It could also be discarded as ordinary trash since it doesn't contain anything harmful.

Posted by Scott Elliott at 3:57 PM