Before I got my own 3D printer I always liked doing business with Bradley Rigdon at printo3d.com because he was always happy to try experimental ideas, so long as they were reasonable. For example in 2008 he shared a video of a Rubik-style cube that was built already-assembled on a Dimension SST 1200es in collaboration with another puzzle designer.

A longtime supporter of 3D printing in general, Bradley was lucky enough to get his original iPhone case built in Desktop Factory's unique additive process before they ceased development.

I recently built Bradley's updated iPhone 4 case on the SD300. 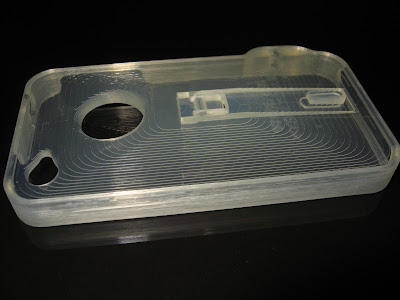 The new case has tiny letters embossed on the inside, so small that I couldn't remove the plastic inside. But the cuts were sufficiently clear and legible that it wasn't really necessary. 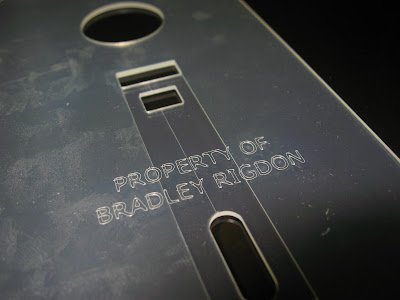 I installed a new XY cutting knife at the start of the build, but it broke part way through so I reinstalled the old knife to finish the model. This is the first time I'd seen a new knife fail so quickly, so I hope it was just a freak accident.

Regardless, it offered a rare opportunity to compare the cutting quality of a new knife to a worn one. On the model at left you can see a slight transition in sidewall texture where the knife was replaced. The new knife produced walls with a clean, lustrious texture while the old knife had a slightly frosty texture. 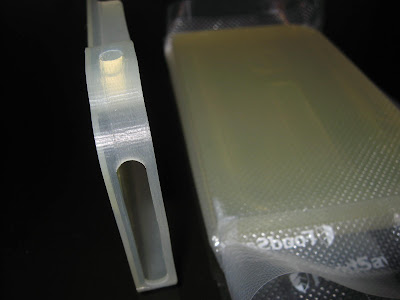 The finished model has a fold-out kickstand and tripod mount. 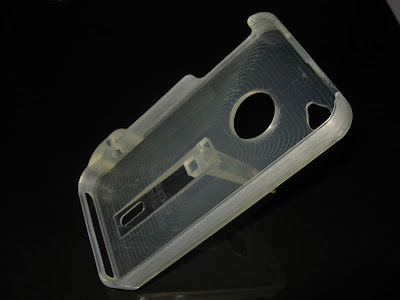 Bradley ambitiously wanted to peel the supports himself making use of his experence with Dimension's BST break-away supports, so I give him this video documenting how I'd cleaned the model. It's rather dry, but it was intended to be instructive not entertaining.
Posted by Scott Elliott at 9:37 PM