Yesterday designer George Bell emailed me a file for his Exploding Ball puzzle. The pieces have all sorts of awkward angles, so I just took a guess on how to orient it for optimal building on the SD300.

It would take about 7 hours to build all eleven parts, but I chose to build 3 sample parts because it would only take 3 hours so I'd be able to inspect them before bedtime. It was lucky that I'd printed a couple of samples, as I'd arranged the peeling cuts so they put stress on a thin section. I broke one of the pieces when I hastily peeled the supports away. It wouldn't impair the part's usefulness, but it's unsightly. (Clarification: The part on the right is flat where a tiny piece of the curve broke off; the part on the left is intact, showing how the curve should look.) 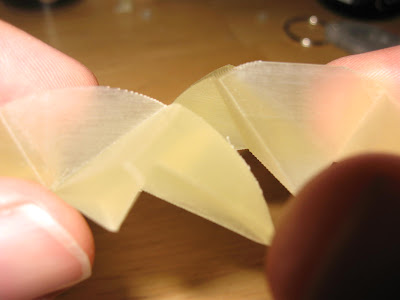 I fixed the peeling cuts and ran another build overnight. Today I peeled away the supports quickly, easily, without any damage to the parts. When the parts are assembled, they form a ball that's virtually impossible to disassemble because of the smooth surface and bizarre angles. Even if you get your nails in the cracks you can't pull it apart because your touch tends to hold the puzzle together. But it's supposed to disassemble when it's spun, thanks to centrifugal force. 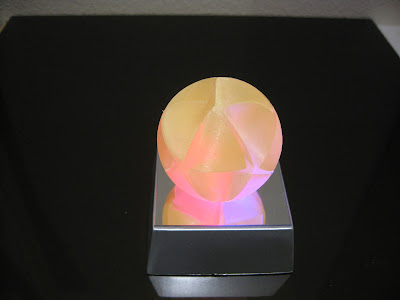 It took me half an hour to assemble the puzzle the first time, so I recorded a video of my first attempt to 'explode' the puzzle because I wasn't sure if I'd get it put together again. It took several tries. It's lucky the finished model is pretty tough, since I dropped it at lot!