Yesterday I noticed the SD300 had mysteriously stopped part way through a build. The computer's status monitor said the SD300 was actively building layer 22, but the SD300's display suggested it was waiting for the computer. Pressing Pause/Resume had no effect. 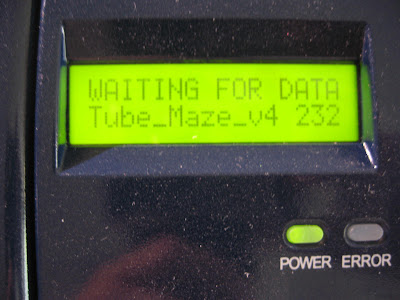 So I ran the SDView, the SD300 maintenance app, and brought up the machine's log. There were 3 unusual entries that said "Unknown command in file." Had there been a data transmission error between the computer and the SD300? In any case, the log indicated the SD300 hadn't finished layer 21 because it was "waiting for host" to send the last data, but I guess the computer thought layer 21 had been finished and was waiting to send layer 22. Stalemate! 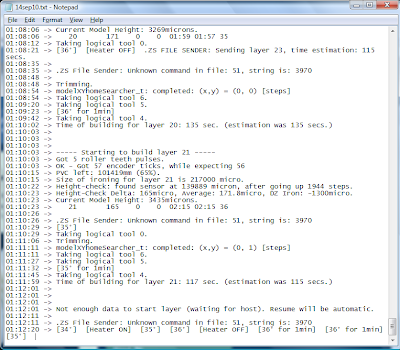 So, how could I resolve this apparent deadlock?

The SD300 has a robust procedure for recovering from power outages, so I pulled the plug for a few minutes to simulate a power outage. That worked!

When I plugged it in again, the SD300 went through its initialization and recognized that it had unfinished model. After verifying the model's integrity the SD300 asked me to confirm that it should resume the model in-progress. Sure enough, it negotiated with the computer to re-load the model data and it resumed building after a 2 minute pause for "Loading."
Posted by Scott Elliott at 11:41 PM