Adapting the Magic Screw for Makerbots 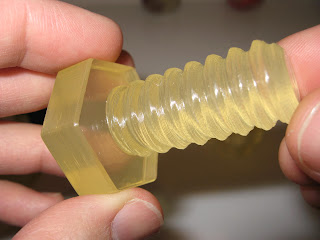 Last month I shared my Wrong Way Bolt model, but home users found themselves unable to build functional copies of it using hobby-type 3D printers like the Makerbot Thing-o-Matic.  The model's geometry seemed to fall within the rule-of-thumb limits, but I looked closely at individual 'slices' of the model and thought about what would actually occur when it was built using a hobby extruder.

At left is a slice of the trick nut, color-coded with shades of red to indicate the region to be built for the present layer.  Bright red areas are supported by the layer below while dark-red areas are unsupported overhangs.  When an hobby-type 3D printer tries to build the overhang marked with a circle its extruder would follow the path in white but the thread of extruded plastic won't have any support.  As a result, the thread will be pulled into a straight line between the two points where it's supported by the layer underneath.  The Makerbot would probably build some of the overhang, like the diagram at right.  It would probably need multiple layers before it could build that whole overhang, but each layer moves the overhang to a different place (because it's a screw) so the hobby-printer wouldn't have a chance to catch up. 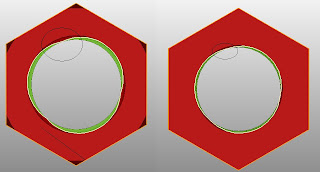 The model could probably be adapted for hobby-type printers by designing the threads with a goal of eliminating the concave shapes.  Overhangs could probably be built with very high accuracy so long as they didn't have curves or corners in the unsupported regions.  So I designed a trick thread with a cross-section whose overhangs form straight lines, like so... 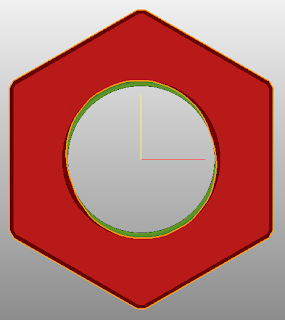 I don't own a Makerbot (nor any other hobby printer) so I don't really know if this will be any more buildable than the model I'd originally designed for my SD300.  But it's a starting point, in any event, as the trick threads function correctly and I'm sharing the source data so other users can adapt it if needed.

This new model and its source data are available from Thingiverse here so anyone can download it and edit it.
Posted by Scott Elliott at 2:21 PM