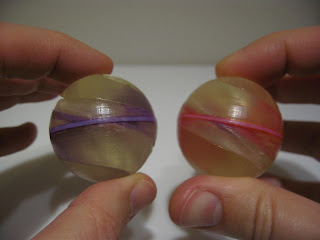 After my Helical Burr Experiment had required sanding to make the pieces fit together, I refined the data and built a second model just to fix the problems with the first.  The new one (on the right) fits together smoothly, but it still has impractically-thin walls so it's just another experimental prototype. 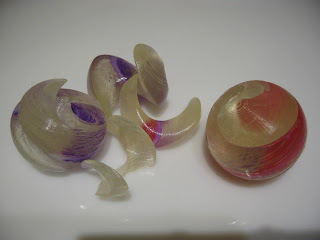 I'd intended to design it so the parts could only be put together in one specific sequence, but testing the new model revealed a slight flaw: one of the pieces could be put on (or taken off) out-of-sequence because I'd only blocked movement in one of the two directions it might move.  I probably wouldn't have discovered the oversight without building these test models.

Here's a movie demonstrating how the puzzle works and revealing the design oversight.

One of the pieces had some exceptionally thin edges, which came out kind of wispy the first time so I tried building it in a horizontal orientation for comparison.  The new orientation is probably a bit stronger, but the difference isn't compelling.  Both parts work about the same. 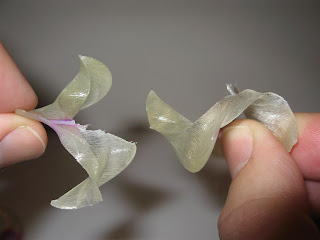 I will probably start over from scratch because of the thin walls and un-blocked movements, but I consider it a very successful experiment nevertheless.
Posted by Scott Elliott at 11:00 PM