Ordinarily, the SD300 tests the integrity of the XY cutter at the completion of each layer by using the cutter to separate the model from the material and then attempting to rewind the material onto the source roll. When a cutter is worn out the material remains attached to the model and the machine emits a distinctive noise from an internal clutch.

The machine had a relatively new XY cutter, so I was surprised to hear the slipping-clutch noise which usually indicates a worn out cutter. The machine's log seemed to express the same astonishment, "the cutting knife is new and the previous layer was OK." Evidently the SD300 concluded the XY cutter was too new, so it just tried to continue building the model until I intervened. 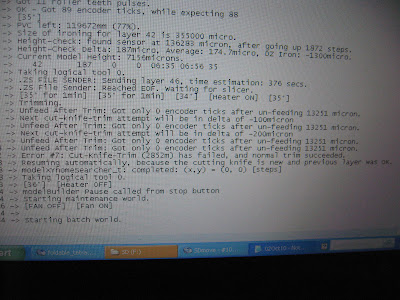 Normally the machine can continue to build the same model after the XY cutter is replaced, but inspection revealed this model was full of air bubbles. The glue hadn't been spreading properly so the layers weren't welding together. This model would be defective, even if the rest of it built perfectly. 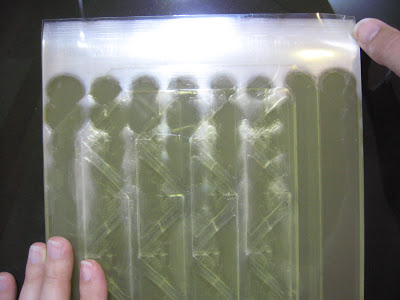 I ran some tests which confirmed the culprit was the XY knife, not air in the glue system. I've had other knives wear out, but this was the first occasion where it caused any problem with the model being built. Evidently it had scraped the model surface, creating gouges and voids which prevented the glue from spreading between sheets. Everything worked when I replaced this cutter (shown below) with a new one. 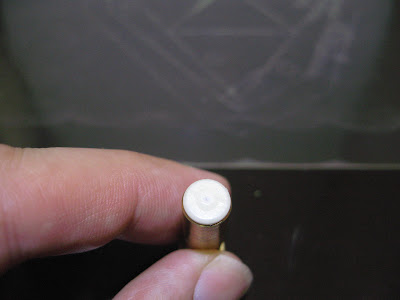 Frankly, I'm pleased to have only two failed builds since I bought the machine in February. That compares favorably with colleagues who use V-Flash and Dimension modelers.

Admittedly I've had bad builds for other reasons, such as bad STL designs or improper layouts, but only two builds have been defective. My first defective build was entirely my own fault, as I'd allowed the glue to run out. This one might have been a freak incident.
Posted by Scott Elliott at 1:06 AM