The Yoshi Box is a hinged toy reminiscent of the folding patterns of a Yoshimoto Cube, but it employs mechanical hinges to allow the pieces to be folded into a endless cycle of shapes.  The pictured model is available for purchase from Shapeways or Sculpteo. 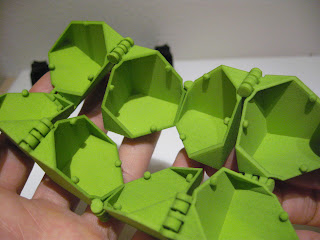 This toy is made up of eight bisected boxes, each attached to two of its neighbors with mechanical hinges.  This sample was built in nylon SLS with the hinges already fused together. 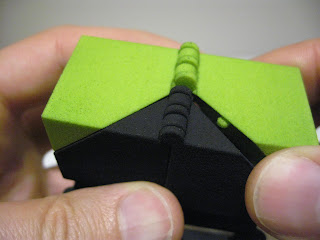 The small tabs enable two models to be snapped together so they'll move in harmony with each other.  I suppose you could hide small treasures inside the boxes, too.

The inspiration for the Yoshi Box came from Yoshi Prime, a previous Yoshimoto-like toy I built on my SD300 using living hinges.  It's built in one piece with thin, flexible plastic connections that permit it to be folded in each axis. 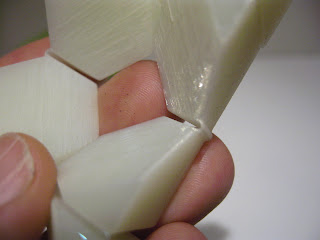 Here's a closer view of a living hinge.  To build a vertically-oriented living hinge on the SD300 I bridged the connection between adjacent cubes with a wall 0.3mm thick, with a graceful curve to spread the stresses as much as possible.  I suspect it would have a limited life because of the amount of bending required, although it hasn't broken.  (Yet.) 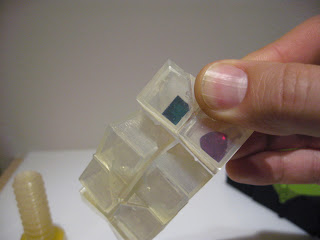 This model combines the box-like style of the Yoshi Box with the living hinges of Yoshi Prime, forming a group of 8 small treasure-boxes connected by living hinges.