Captain Angus ferried cars between Dover and Calais.
His patronage was dwindling, there were fewer cars each day!

So he bridged the English Channel with a winding two-lane curve.
Could it bring back the traffic that his ferry used to serve?

But halfway 'cross the span there arose an awful fight--
British cars kept left while the French drove on the right!

Traffic was all jammed, held up by long delays.
So he bypassed the first bridge with two one-lane motorways!

These were even worse because there wasn't room to pass!
But his ferry was full again, so Angus didn't give a rat's concern.

I contrived this silly "ferry tale" as a whimsical backstory for my Not-so-Strait of Dover puzzle.  Angus revitalized his ferry business by enticing drivers to a bridge so twisty and impractical that they were forced to take his ferry instead.

Puzzle bloggers have lately been discussing apparently-impossible card folding tricks, like this and that.  I could undoubtedly build something like it on the SD300, but the material it uses is so resilient that the results wouldn't so incredible as carving shapes from unbroken card stock.

But I was inspired to turn the concept around: rather than folding a flat sheet into impossibly-interlocked overlaps, I could instead design already-overlapped profiles that have to be folded to make them interlock.  I started with a simple design as a test. 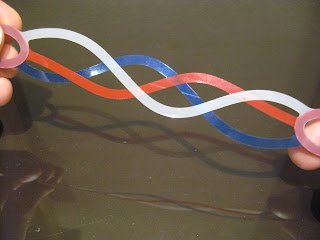 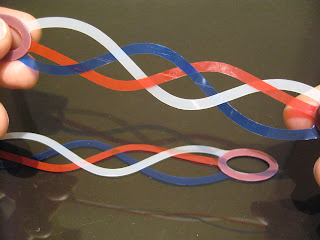 But after some maneuvering (and a little guidance from Martin Gardner's books) the strands can be rearranged into a woven configuration without breaking any of the connections.  Now white weaves over blue and under red.  Blue weaves over red and under white.  Red weaves over white and under blue. 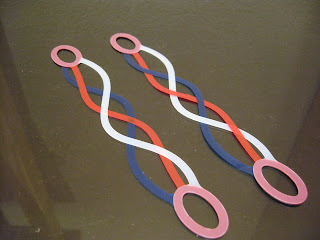 Most people are quite baffled by it, but the pieces can be endlessly woven an un-woven once you discover a solution.  Some users tangled the pieces, but found it to be helpfully resilient--it tends to spring back even after becoming quite knotted.  They've withstood a great deal of abuse, suffering no more harm than an occasional crease mark.
Posted by Scott Elliott at 1:51 PM