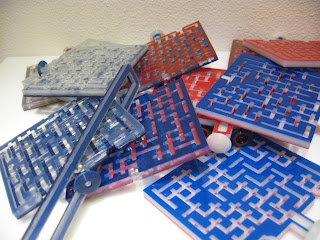 I've produced a ton of test models for my Cooksey's Griddle puzzle of the past month because I discovered how to build them cheaply with relative ease.  That's quite a change from my experience in February, when I had so much trouble building prototypes of it that I gave up and submitted the model to i.Materialise to build it for me--but they couldn't build it either.  (Bad STL file, I think.)

But I didn't really set out to build so many test models, it just happened.  The first model worked fine but someone suggested a nice improvement so I built another.  Then someone suggested another change, and I built another to try it out.  Eventually I built over a dozen test models, each with minor differences from the last.  There are so many that I'll discuss the details of the puzzle in another post.

In this post I'll concentrate on the surprising economy of this particular model... 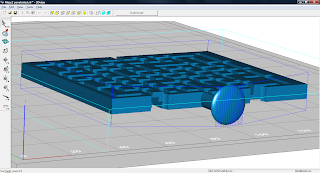 Originally this puzzle was designed as a flat slab with a 16mm round disc attached.  Above, the diagram shows it with a rectangular outline around it showing the volume of material the SD300 would build to create this model.  Much of the area above and below the slab is just empty space, but the SD300 would consume that much material in order to support the slab while it built the disc.  This would consume less than $30 worth of material, much cheaper than sending it to a 3D printing service...even deep-discount Shapeways. 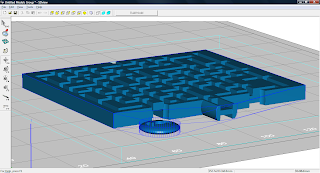 But material costs (and build time) were reduced by two-thirds if I built the disc as a separate piece to be glued onto the model after building it.  As shown above, no volume would be wasted above or below the slab. 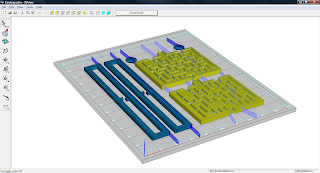 I could realize a further savings by building two models at a time.  That gave me two complete puzzles in each build job, complete with all their accessories, for less than $10 per puzzle.  Each job consumed only 6% of an SD300 material kit; I could build 32 of these puzzles with 1 box of SD300 material. 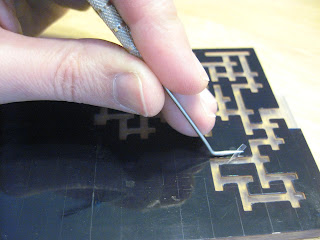 Particularly critical was the use of a precision probe, like this Moody Tools set, to peel material out of the narrow grooves.  These probes are also excellent for clearing small holes without marring the model, especially in narrow or deep locations where the standard Solido-supplied tweezers aren't optimal.
Posted by Scott Elliott at 3:13 PM