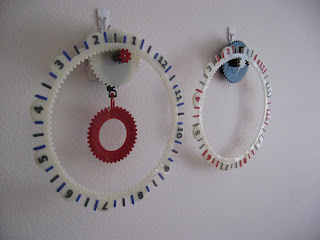 Last week Bradley Rigdon shared Gear O'Clock, a novel clock that indicates the current time using a large geared ring with numbered tabs around its rim.  This week I posted a set of Accessory Parts to adapt or customize Gear O'Clock. 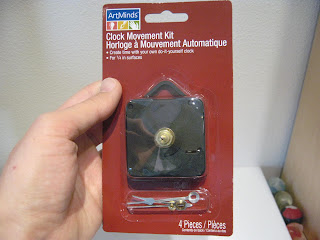 Bradley used a clock movement salvaged from an inexpensive wall clock he bought at Wal-Mart.  I set out to adapt the parts for use with an ArtMinds clock movement from my local Michaels craft store.

For the benefit of Thingiverse users, here's a detailed explanation of my accessory parts: 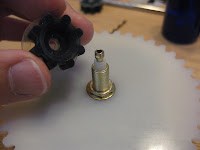 Clock Drive Gear slotted NO SUPPORT.stl has a slotted opening that fits over the threaded hour-hand shank on the craft-store clock movement.   It took some effort to avoid excessive overhangs so the part retains its buildability on hobby 3D printers.  I added a wide opening on the back side of the gear because some of the craft store movements have big shanks (like this one). 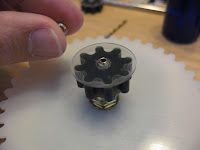 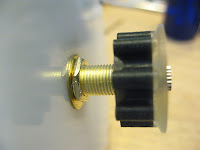 The slotted-shape of the shank keeps the Drive Gear synchronized with the shaft, just as a conventional hour hand would be.  The clock movement kit includes a threaded brass ring that screws over the Drive Gear to secure it in position.

Some of the clock movement kits have short shanks and others have really long shanks like the one illustrated here, so I added a small fence inside the deep gear teeth so the driven clock gear won't tend to walk out of the back side of the Drive Gear. 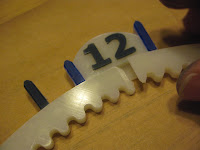 Bradley's Clock Base ring is 10 inches in diameter so it can't be built in one piece on the SD300, nor on most hobby 3D printers.

Clock Base div4.stl divides the Clock Base into four parts, which can be spliced using the number tabs at the 3, 6, 9, and 12 o'clock positions. 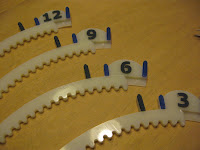 The number tabs are keyed into holes in the Base Ring, so I glued one number tab to the end of each of the four parts. 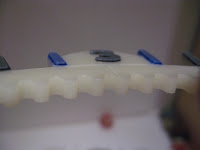 Then join each piece to the next by hooking it into the keyed holes and injecting glue between the surfaces.  Notice how the diagonal join ensures a gradual transition from one section to the next so the gear won't snag when it turns in the clock.  Be sure to attach the numbers counterclockwise relative to an ordinary clock! 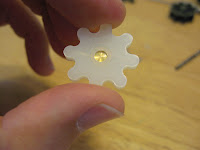 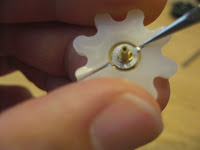 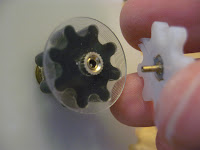 My revised Drive Gear exposes a hole for the clock's second hand, so I designed Clock Seconds Gear.stl to cover the hole and add a little animation to the clock.

After the Clock Seconds Gear is attached to the second hand parts, it pushes into the exposed opening in the clock shank. 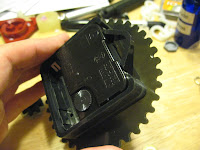 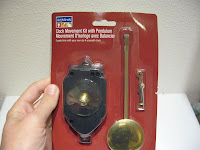 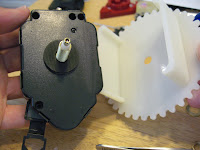 Some clock movement kits feature a moving pendulum, which adds even more animation to the clock.  So I built the even-larger Clock Mechanism Mount Pendulum.stl mount which has another cutout on the bottom for the pendulum mechanism. 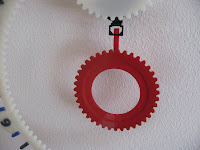 Clock Gear Pendulum.stl is a gear-themed pendulum for use with the pendulum-type clock movement kit.

Posted by Scott Elliott at 3:26 PM