Unlike most other 3D printers, the SD300 builds solid parts faster than hollow ones of the same size. Hollow parts require just as much material as solid ones, so I generally make my designs as thick and solid as I like.

But I know many designers who optimize their designs for Shapeways White Strong & Flexible material, so they typically design hollow parts with very thin walls to minimize costs. The SD300 isn't very suitable for very thin freestanding walls, but could I build such models if I just left the support material embedded inside? Would it sacrifice functionality or strength?

A colleague graciously lent me a set of STLs that had been optimized for the EOS with exterior walls only 0.8mm thick and I set out to build them with peeling cuts arranged to leave the support material trapped inside. 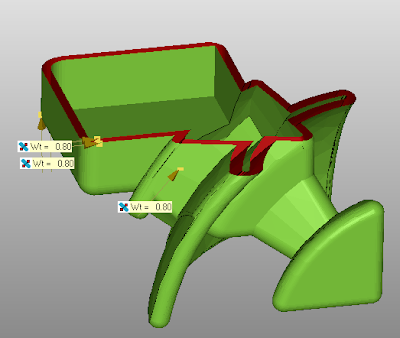 I built a small batch of test parts without any trouble. Because the support material is trapped inside they feel like ordinary solid parts, but they aren't quite as transparent as solid parts usually are. The interiors are somewhat cloudy, undoubtedly because the SD300 cut and masked the material inside to facilitate removal. They looked perfectly acceptable, although I have my doubts about their durability. 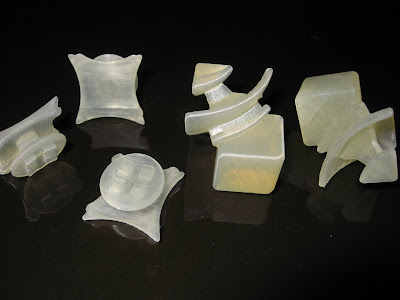 It went well enough that I tried another batch, then another. A big piece broke off while I was peeling the last batch of parts. The chip (at top right) is still attached to the support material, and the pin is pointing to the surface where the chip broke off. If you look carefully you can see the thin, triangular border which was the only region that had held it together. Not surprising, really. 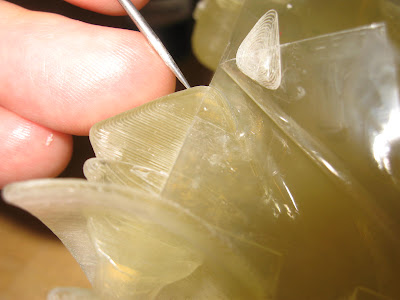 I repaired the break by putting the piece back and running welding solvent (Weld-On 2007) over the model. The solvent helped glue together the surface of the model, but the support material remained safely un-bonded so it could still be peeled away. Apparently the SD300's Anti-Glue coating works against Weld-On. 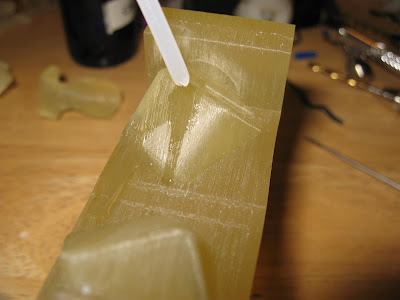 I test-assembled some of the parts; they didn't fit together as accurately as parts built from solid STL data. That makes sense in hindsight. Using "hollow" STL data meant the interior material wasn't continuous because the SD300 had made cuts for the interior walls and had masked the interior layers with Anti-Glue. 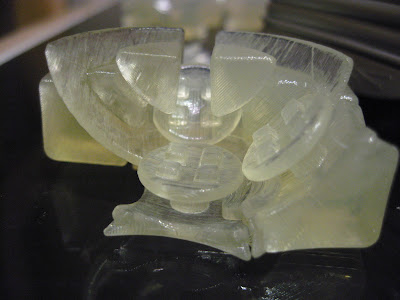 So the experiment answered my basic question, could I build STLs that had been optimized for EOS or other thin-wall technologies? Yes, I could build test models with restrictions on their usefulness:
If I intend to build parts on the SD300 I would not design them with thin walls like these, but the technique is potentially useful for verifying the basic size, shape, and dimensions of STL data that's optimized for another build process. 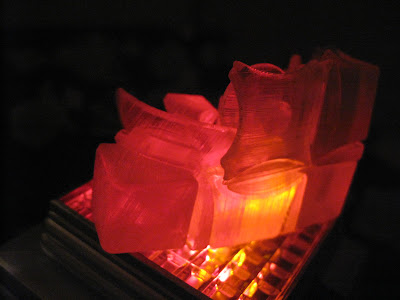 Posted by Scott Elliott at 5:52 PM