I'm busily cranking out puzzles to exchange, trade, and sell at IPP34.  In addition to a few old-standy puzzles here's a look at what's new from me this year... 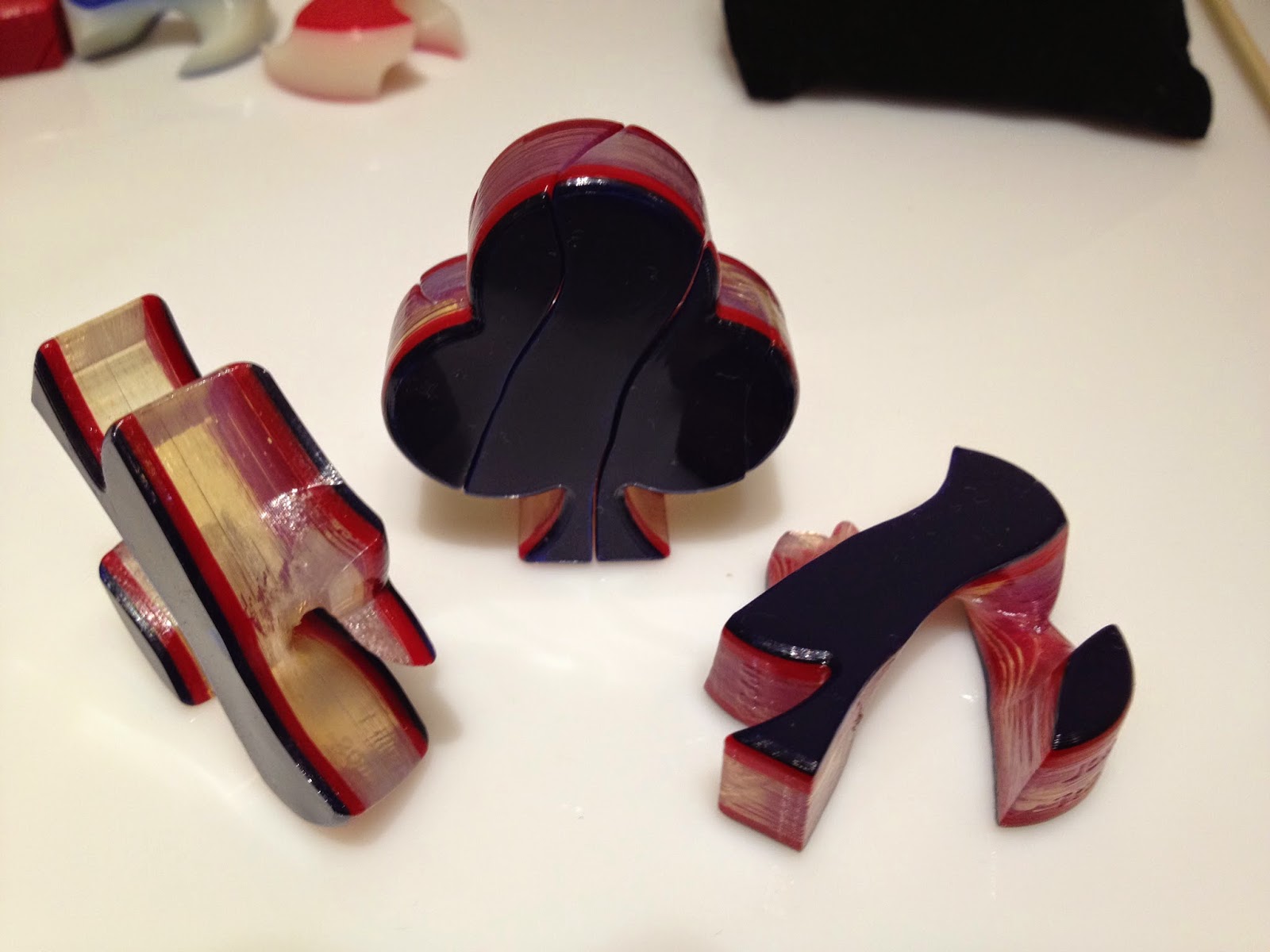 For the Puzzle Exchange, this consists of two identical pieces that can be joined together to make a ♣ club shape.  Testers at my office gave me plenty of feedback and guidance, and it took some real effort to implement their suggestions.  My early revisions resembled an ordinary clover leaf, but testers insisted it needed a widely flared base in order to resemble a Club suit--it took some design ingenuity, but I made it work! 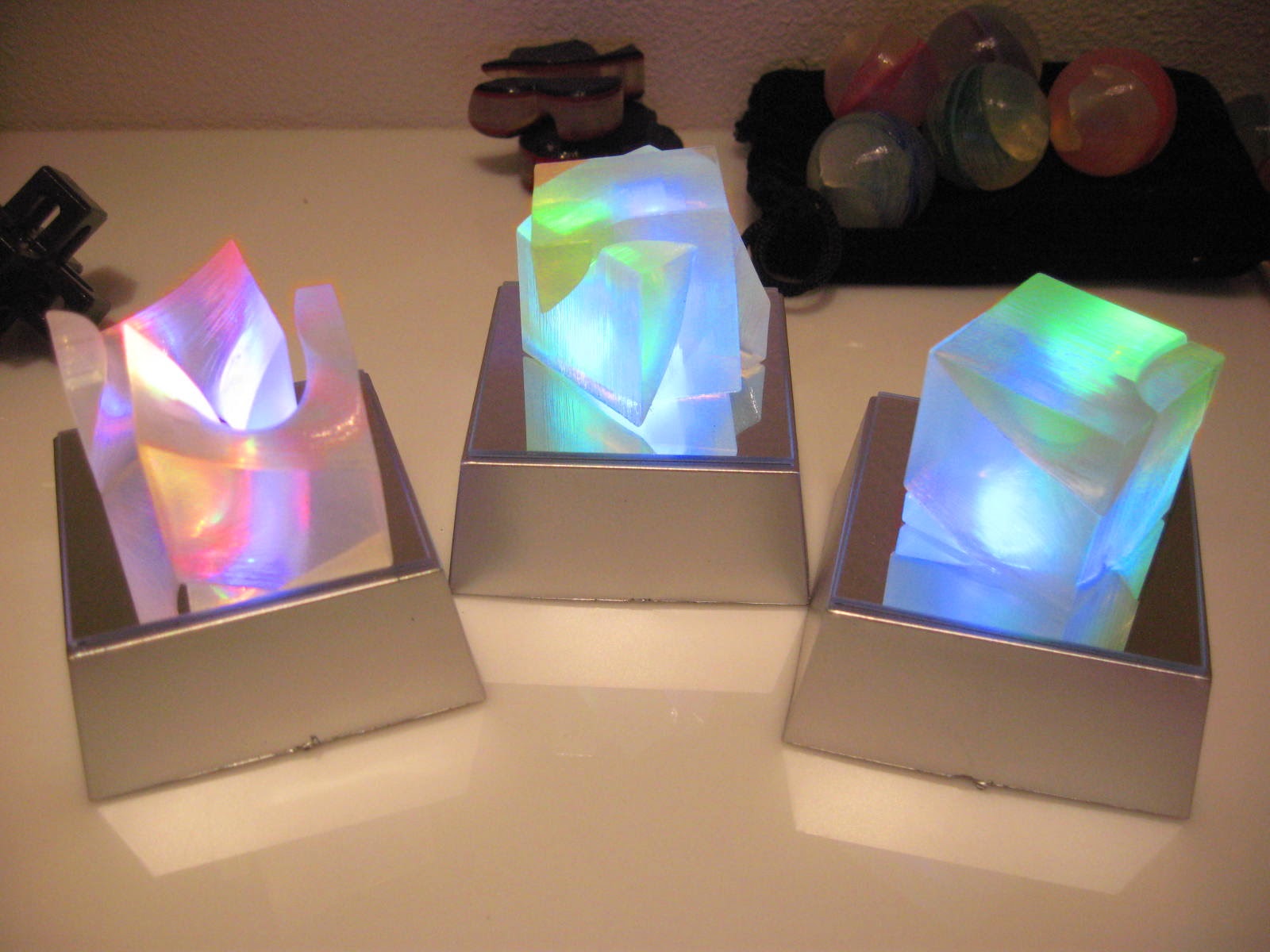 Although I have built plenty of cubic dissections in the past, this one really surprised me!  It has two identical pieces that can be joined together to make a cube, but they just as easily join into a variety of abstract shapes.  It's a fancy-looking objet d'art when placed on a light stand, although it's hard to get a picture that shows how pretty it really looks. 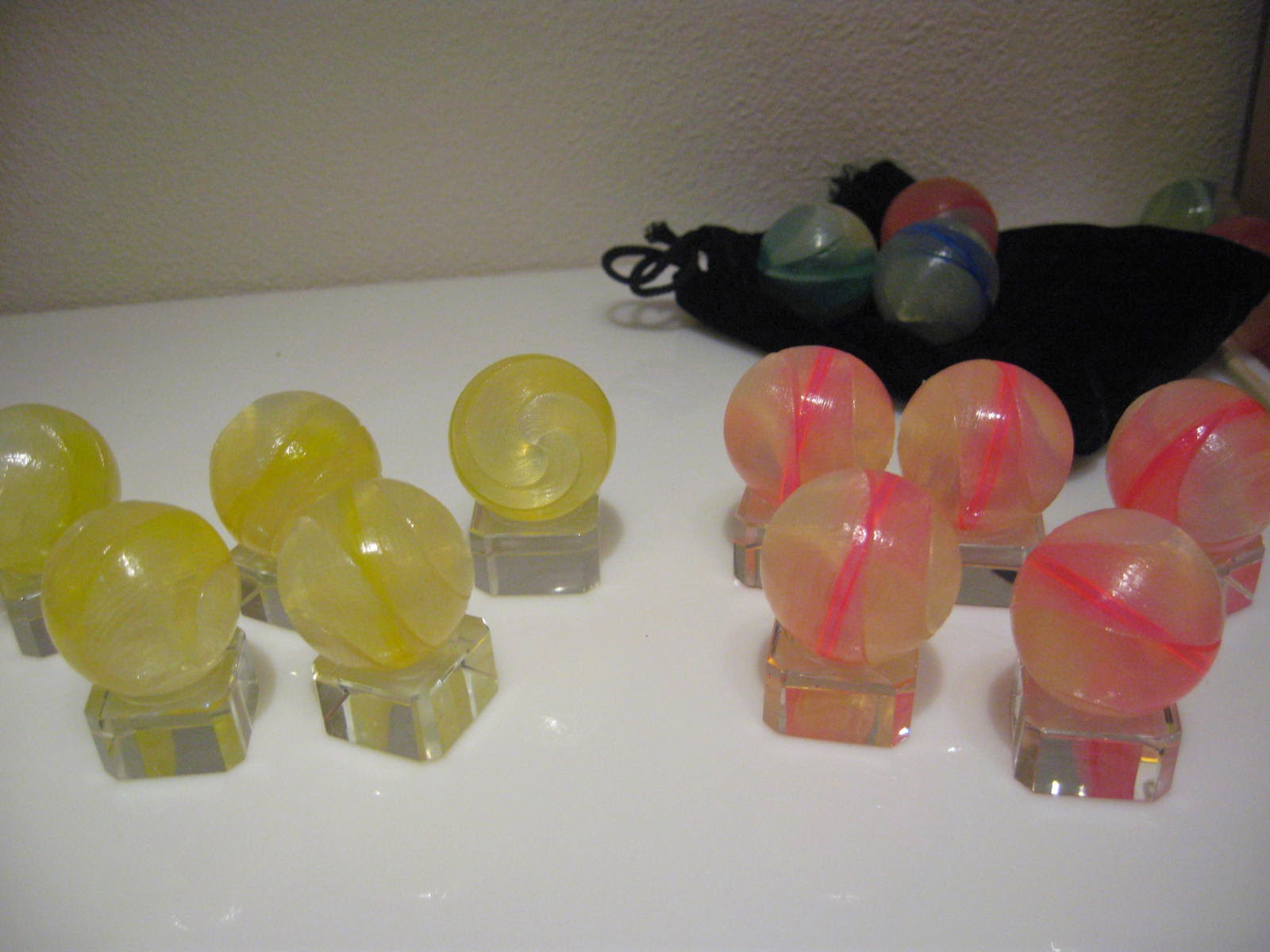 These are successors to the colored marbles from the Bag of Marbles which I had previously sold.  Pink Marble is a two-piece puzzle, the first in the series that can only be joined together at one specific point on each piece.  Yellow Marble is a three-piece puzzle that goes a step further; it's the hardest of the series, but not overly difficult for the average solver. 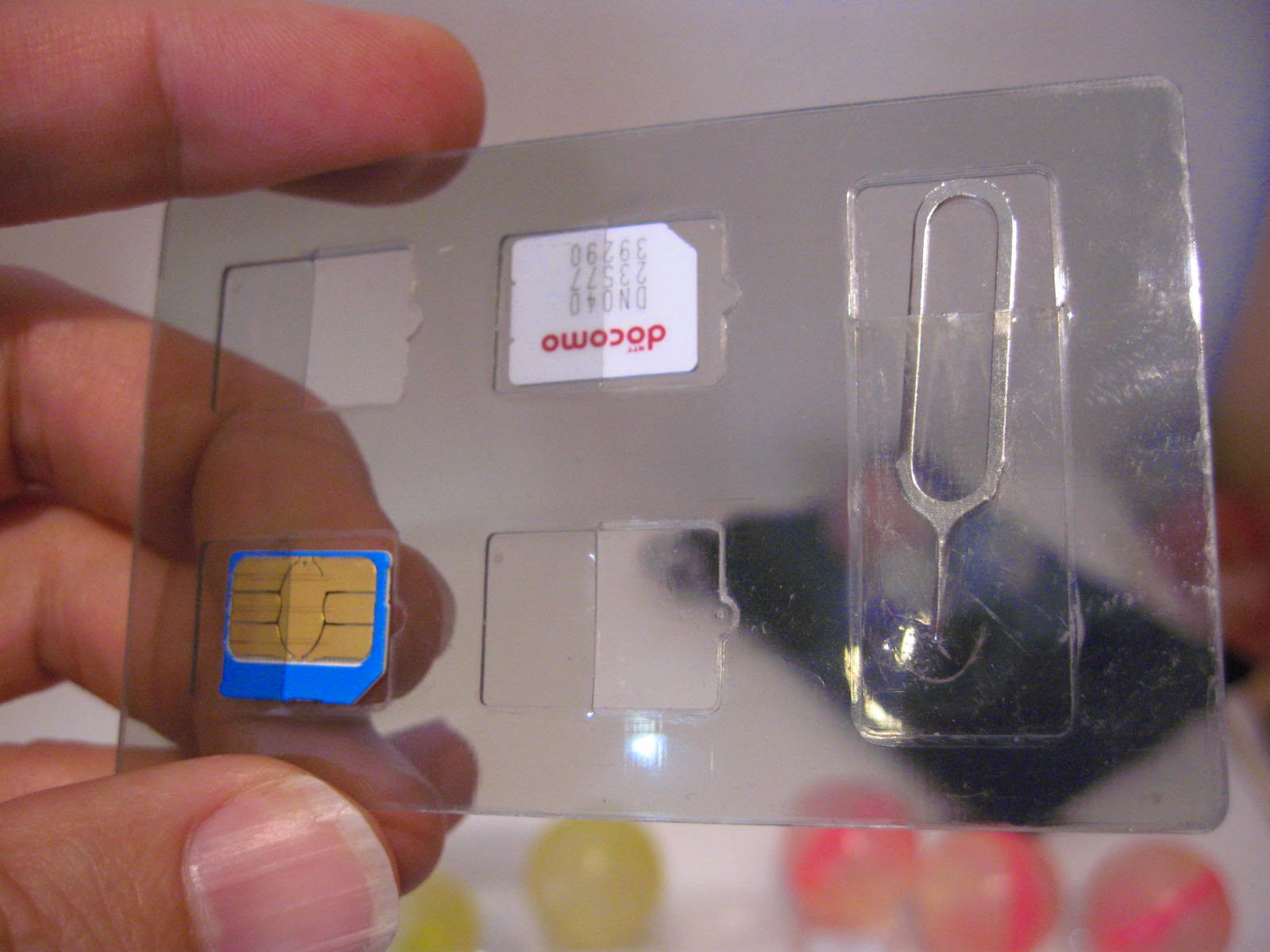 This isn't really a puzzle, but it's a useful device when traveling overseas.  It exploits the SD300's laminated construction technique to build a thin storage device that's literally the size of a credit card, with storage pockets for four SIMs and an eject tool (or a paper clip).  Very handy! 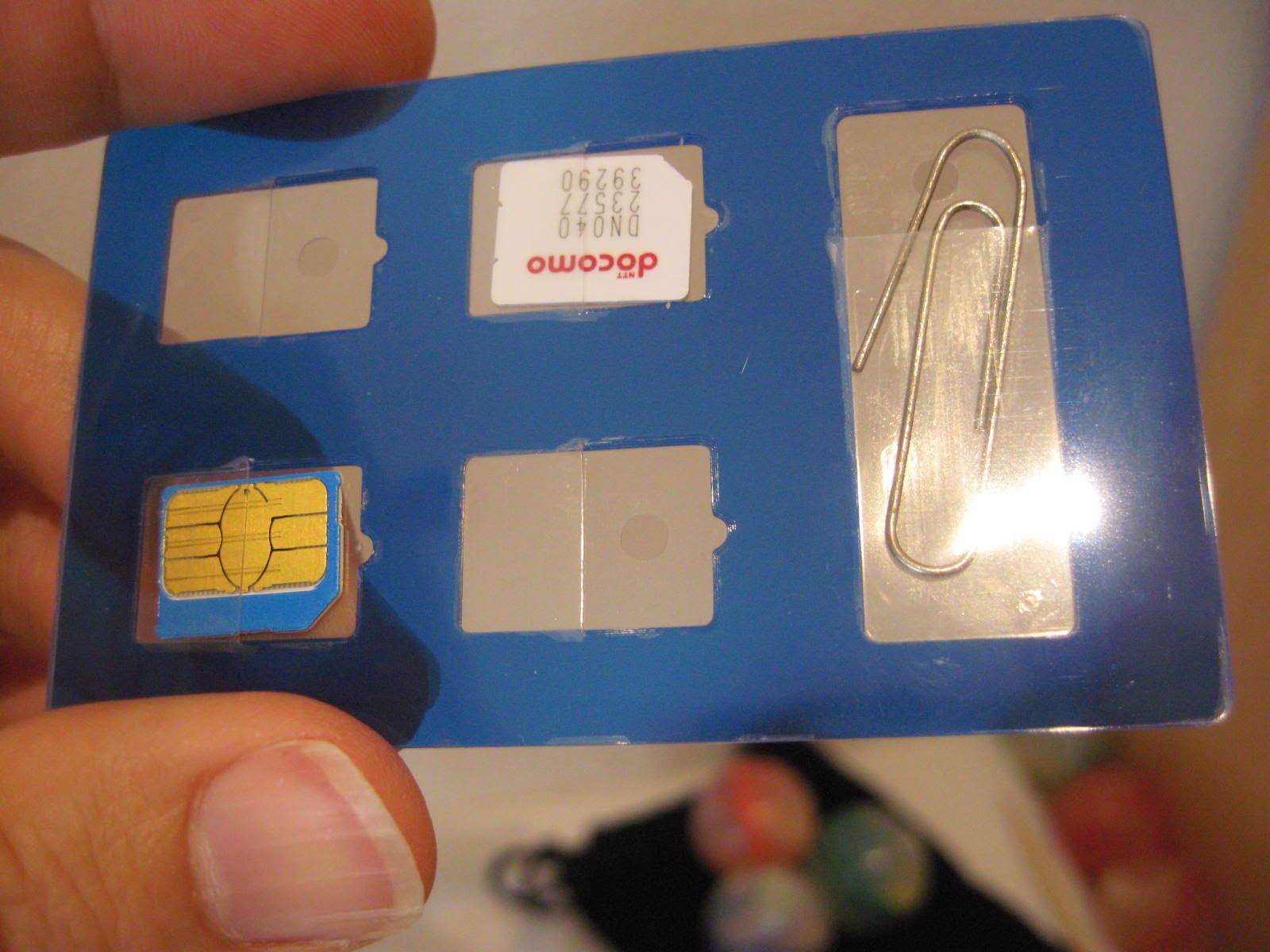