Rundown of puzzles for IPP33 Peppermint, my entry for the puzzle exchange, was digitally manufactured in colorful ABS by Bradley Rigdon at PrintTo3D.  I built prototypes on my SD300, those PVC models were a bit too flexible to give the right "feel" for this particular puzzle.  Each piece is made in two colors, red and white; the colors play a subtle but important role. 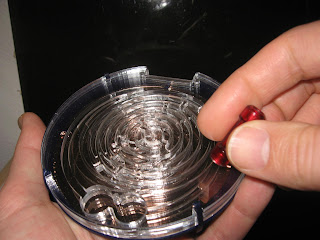 Moiré Maze combines laser-cut acrylic and 3D printed vinyl.  The challenge is to guide a small magnet through the maze from Start to Finish.  That goal sounds simple enough, but it's easy to get lost in the visually-confounding patterns of rings reflected against a mirrored background. 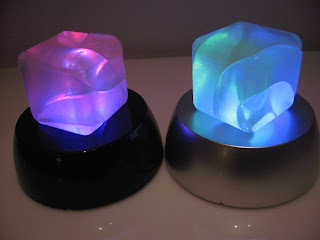 Cubic Trisection is one of the puzzles I also sold at IPP32 last year.  The challenge is to assemble the three pieces into a cube, as shown.  All three pieces are identical, but not symmetrical.  Most users easily assemble the first two pieces, but encounter trouble adding the third. 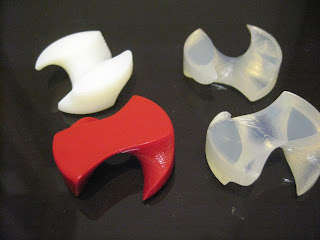 Puckup is a two-piece assembly puzzle, which I'm selling in transparent material or a red-white color scheme.  Tyler Barrett suggested a somewhat edgier name "What the Puck" but the simpler Puckup name had already been picked up on one of the puzzle forums. 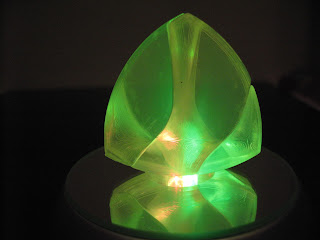 Twisty Trillion is a successor to Puckup whose shape provokes a lot more confusion among users.  Neither puzzle is fiendishly difficult, but Twisty Trillion takes most people a whole lot longer to figure out.  I built them all on the SD300 using transparent vinyl because light reflects attractively inside the puzzle. 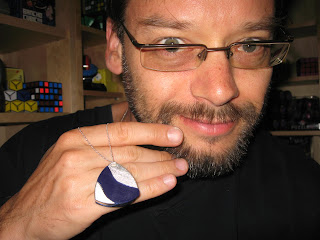 I commissioned two copies of a Trillion Pendant to be built as puzzle jewelry--one in brass from i.Materialise, the other in silver from Shapeways.  But neither model was delivered on time--Shapeways lost one of the pieces, and i.Materialise is over 3 weeks behind schedule.  So I salvaged the partly-incomplete silver model by building its other half in luxuriously-dark blue vinyl, which contrasts gracefully with the silver piece.  Frankly, it looks nicer than it would have if both pieces had been silver! 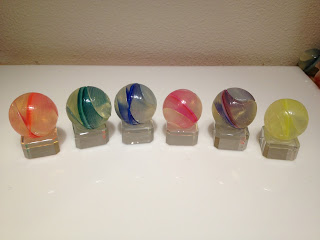 Here's a colorful assortment of marble puzzles, three of which will be available for sale as Bag of Marbles.  The others are experimental designs, which I'd like to test on a few puzzlers at IPP.  In particular, the pink and purple models are two closely-related designs, but my first few testers think the purple one is much harder than the pink one.  Will others react the same way?  IPP is a great opportunity to find out!
Posted by Scott Elliott at 2:44 PM