Through email I've learned a lot of tricks and solutions to SD300 issues.  Occasionally I've relayed a solution from one user to another, who then devises an improvement of his own. 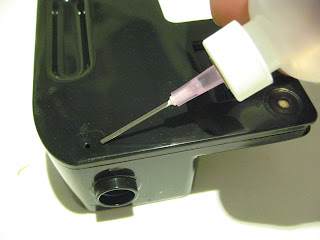 A user in Romania found his Anti-Glue cartridge had dried out while the machine wasn't being used, so here's a trick I learned from a British user: add water to the cartridge by injecting it into the breather hole with a syringe or needle-tipped squeeze bottle.  (49 gauge fits)  One user drilled a larger hole and refilled it through a funnel.

This technique could also be used to extend the life of an Anti-Glue cartridge in case you've spoiled one. 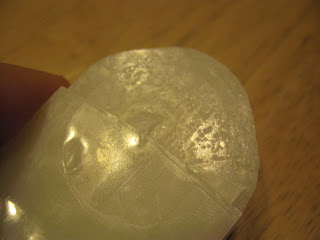 Occasionally users have reported an odd phenomenon where unused support material doesn't tear away cleanly because the layers are stuck together and the unused plastic has a gooey, melted texture.  I'm not sure it's the same, but I recently experienced something like it while cleaning the model in the picture.  Most of this material is unused support material.  It should all be shiny like the area at lower left.  The problem area is at top-right, which didn't peel away cleanly.  Each layer of unused material was littered with tiny spots that were tightly bonded to the layers underneath--and it appears that the shiny Anti-Glue film was interrupted by little spots where the layers were unintentionally glued together. 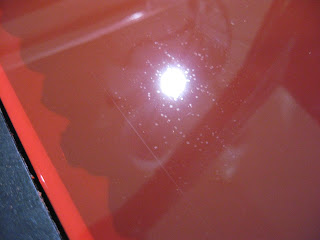 My first theory was glue might have dripped after ironing a new layer to the top of the model block, as pictured in this previous post.  So I watched the machine carefully during the next build.  No droplets.  But when the machine applied Anti-Glue there were spots in the film--holes through which glue might unintentionally bond the base layer to the model and support material. 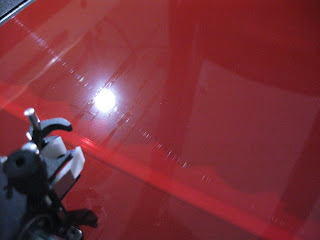 I watched more carefully as the machine ironed the next layer of material, and noticed it already had smears of glue across the top surface--right out of the feeder!  How was that even possible? 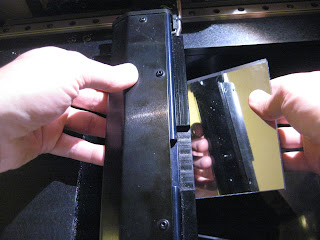 Aha!  There were scraps of plastic clinging to the underside of the iron bridge, which contains the jets that spread glue on the top of the model.  My current theory is that those scraps hung down enough to touch the PVC as it was being rewound into the feeder, drawing glue into the feeder by simple capillary action.  Right or wrong, the issue hasn't occurred since I cleaned around the glue jets underneath the iron bridge.

It's not obvious how to get access to inspect and clean the underside of the iron bridge so I made a video.