In July 2010 I saw plans on Thingiverse for building a kit that could be assembled into a Yoshomoto Cube, which is a type of folding puzzle. At that time I didn't have much experience with hinged models, so tried to adapt the concept.

I built a pair of experimental models that had hinges in each axis, some horizontal some vertical. This picture shows the two models before I'd finished removing all the support matieral; they look like they're attached, but I subsequently separated them. 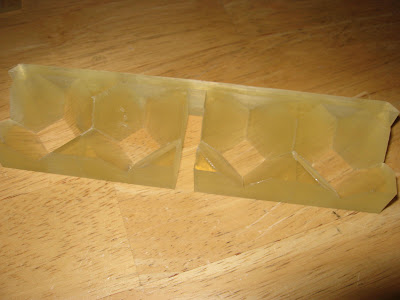 One separated, the models could fold along the hinged connections. They were somewhat delicate (and tiny!) but each could be folded into many shapes just like a Yoshimoto cube. 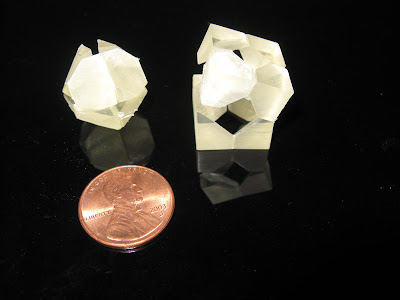 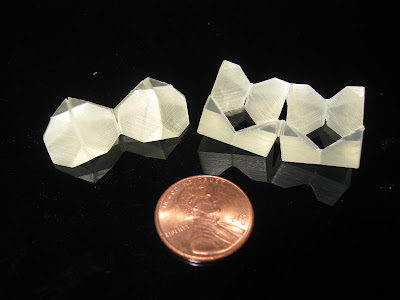 Also like a Yoshimoto cube, the inverted and non-inverted models could be nested together in such a way that the combined pair could still be folded in all the same ways as before. 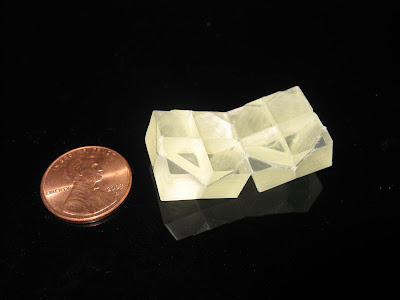 After a few hours' of use both models broke along one of their vertically-oriented hinges. I didn't continue with the project at that time...and now a year has passed by.

Recently I've gained a lot of experience building models with built-in living hinges, so I want to try experimenting with the Yoshimoto cube again soon.
Posted by Scott Elliott at 2:02 PM